Embedded with The Hoppers: Battle Creek 2011 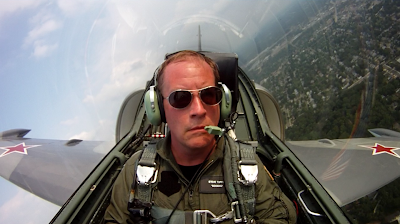 If it's Independence Day weekend, you can be pretty sure that you'll find me in Battle Creek, Michigan for the Field of Flight Airshow and Balloon Festival.
This year is really special. Several months go, I made arrangements to embed for a couple of days as media guy with The Hoppers. 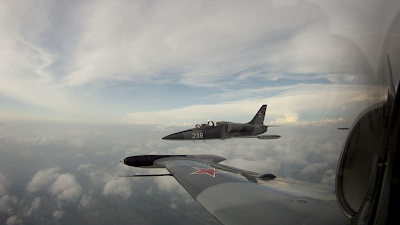 The Hoppers are a civilian L-39 formation team with members from all around the midwest. I've wanted for some time to rig cameras in multiple ships of a formation team and the Hoppers presented a perfect opportunity to do that.
I arrived hurt-early on Friday and spent the morning figuring out where to place cameras for the best effect. This was an ideal situation. The team flew two demo sorties on Friday and a show demo on Saturday. This allowed me to fly up to seven cameras in the aircraft to identify the best angles and wring out any technical issues, as well as get footage for both an Airspeed episode and a promo video for the team. 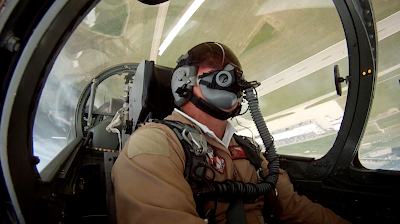 The team's members come from all over the midwest. Tim "Dawg" Brutsche is a longstanding pillar of the Battle Creek show. Tim flew lead for all three demo sorties and I placed a rearward-looking camera in his cockpit, as well as a forward-facing nose cam. I also hung a couple of cameras in the back seat to catch the two and three ships and wired Tim for sound so I could capture the communications. Three other cameras placed in the other three aircraft rounded out the tech setup.
Although I ended up facing some unexpected technical issues (e.g. fogging of the cameras due to the climate control in the aircraft), I got more than I need to come up with a great video. 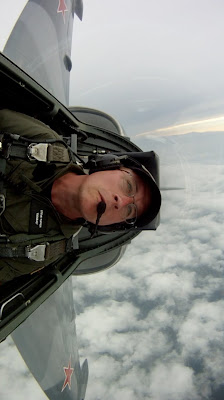 And, of course, it's always good to fly the media guy. I rode along on two sorties. One around the airport practicing demo formations and the break for landing and the other further away and a lot higher to practice formation rejoins and other skills. 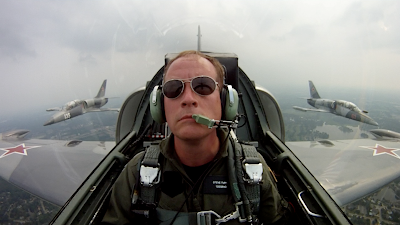 So I have loads of footage and I'm looking forward to really sitting down with it to put together exciting stuff for both Airspeed and the team. It's really late (actually, it's so late, it's early) and I'm about to fall over. But I wanted to get these shots up.
More soon!
Posted by Stephen Force (Steve Tupper) at 4:38 AM