These are the show notes for a video episode. Check out the video episode on your handheld device or personal computer by subscribing to Airspeed using iTunes or your favorite other podcatcher. Or watch it right here by clicking above. It's all free!
Here it is! Airspeed's biggest and best video episode so far!
I've loved the Northrop T-38 for years. Born in the cauldron of the F-5 Freedom Fighter program in the late 1950s, it has since trained more than 50,000 military jet pilots throughout the world. It's sleek and pointy and fast (Mach 1.3 capable). It's the advanced jet trainer for the US Air Force. And it's also the companion trainer for many of the Air Force's most amazing aircraft.
In July, I got an orientation flight with the 99th Reconnaissance Sqn, 9th Reconnaissance Wing at Beale AFB near Sacramento, California. 1.2 hours in the White Rocket. (Or, if you're flying a "BB" tailed T-38, black and red.) It was a great experience.
It has taken some time, but I think that it has been worth it. 49 minutes of JP-4-burning acceleration, pull, and float. In true Airspeed style, the episode covers every angle and isn't afraid to dig for the details that aviators and aviation enthusiasts love.
From a tour of the ramp to see the U-2 Dragon Lady and the RQ-4 Global Hawk up close to egress and survival training to the briefing to highlights from the flight, it's all here.
And it's all swaddled in original music. This is the first outing for Acro Groove, a track that's going to be one of the major themes underlying Acro Camp. It's by 7600, a loose-knit group of aviator musicians. In this particular incarnation, it's FAA Designated Examiner Barry Sutton on drums, yours truly on guitar, and acro IP Don Weaver on keyboards.
This episode is game-changing in aviation podcasting. There's nothing else out there that comes close. I'm fiercely proud of this work. But, even so, it's a waypoint on a journey that will include even bigger, better, and more exciting projects.
Stay tuned! It only gets better from here. 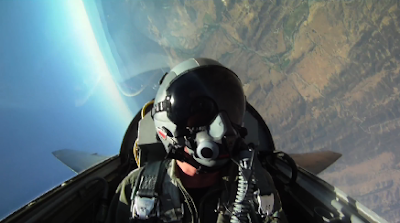 Great job on this episode, Steve! Changing the game indeed ...

Excellent Production! One question, what did he keep asking you to keep your hands clear of? It didn't look like you moved your hands at all.

Nice work Steve. Great BLOG too. How do you get these guys to give you a ride?

The hands-clear had mostly to do with the controls. Just making sure that I didn't interfere in the back with what he was doing in the front.

I watched your T-38 ride during my commuter rail ride home to the 'burbs last week. That slight side-to-side jostle of the rail car seemed to sync perfectly with the similar bumps you were getting in the back of that amazing airplane. For a few minutes, I was right there with you. Thanks, and keep up the great work!

BlogFront.org is committed to uphold the quality standards of blogging. We strive to maintain and promote only the most credible blogs in their respective fields.

Spam blogs or "splogs" has been a problem for some time now and people are getting confused about which blog to trust.

We would like to thank you for maintaining such a reputable blog. We know that it takes time, effort and commitment to keep such a blog and as such, we have added your blog as one of the top Aviation blogs.

You can see your blog listed here: http://blogfront.org/aviation

You can also claim your BlogFront Top Blogs badge at http://blogfront.org/badges/aviation

Thank you for keeping your blog credible. Let's keep the blog revolution alive!