Interview with a Thunderbird 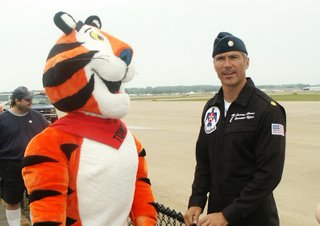 If you’re been listening to Airspeed for awhile, you know that we have a Jones for the F-16 Fighting Falcon that just won’t quit. We also have a high regard for air demonstration teams.

Well, get set for a treat because we went to Battle Creek, Michigan over the Independence Day weekend and entered that special confluence where the F-16 and the air demonstration team come together to produce that wonderful mix of noise, precision, and inspiration that is the United States Air Force Thunderbirds. We were fortunate enough to talk to Maj. Jeremy Sloane shortly after the team landed.

Major Sloane is the operations officer of the Thunderbirds and the squadron’s second in command. He’s in his second season with the squadron and he flies the No. 7 jet. He attended the Air Force Academy and entered the air Force in 1992. Prior to joining the Thunderbirds, Maj. Sloane was an assistant operations officer, instructor pilot, and flight examiner with the F-16C Formal Training Unit, 62nd Fighter Squadron, at Luke air Force Base in Arizona. He has more than 1,800 hours in various configurations of the F-16.

We’ve covered the general information about the Thunderbirds in past episodes, so we thought we’d get a little more in-depth on this one. Not all Thunderbirds have flown the F-16 their whole careers, so we asked about what other aircraft they’ve flown. We also noticed that the team always seems to arrive in tight formation, even on nasty days like the day that they arrived in Battle Creek, and wondered how they flew en route. We asked questions about general aviation and how it compares with military aviation. We also wanted to know how Thunderbird pilots dealt with the high g-forces associated with their demonstrations. And we got answers to all of these questions and more.

Hear the audio on the podcast! Or click here.

[A special shout out on this episode to Dan Lewis!]
Posted by Stephen Force (Steve Tupper) at 8:00 PM