A Ride in the Golden Knights' Jump Aircraft 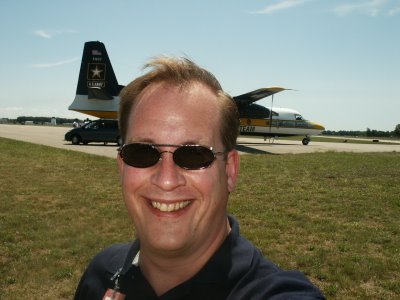 Listen to the audio episode by clicking: http://media.libsyn.com/media/airspeed/AirspeedGoldenKnights.mp3.

When Airspeed covers guys who go up in airplanes, it's usually covering guys who stay in those airplanes - at least until the airplanes land. I personally prefer to stay in perfectly good airplanes while they're aloft and it'd take a pretty bad rash of damage before I'd exit an aircraft that wasn't parked on the ramp.

Not so for the brave and/or crazy who hurl themselves from aircraft and fall for more than a mile before deploying high-tech parachutes. And especially not so for the hands-down best parachute demonstration and competition teams of the United States Army Golden Knights.

Now stationed at the “Home of the Airborne,” Fort Bragg, North Carolina, the Golden Knights started in 1959 with the 13-man Strategic Army Air Corps Sport Parachute Team. Believe it or not, the Eastern Bloc then dominated the sport of parachuting and the US airborne infantry were having none of that. On June 1, 1961, the US Army officially recognized the team as the Army Parachute Team.

Each individual must have a minimum of 150 jumps to tryout for the team. Current members have jump numbers ranging from 250-11,000 jumps, which varies with their number of years of jumping. The team consists of 95 members, which includes pilots, demonstrators, recruiting coordinators, support staff, and others.

Golden Knights pilots average more than 5,500 flying hours and average 10 years of military experience. Many are warrant officers and some are Department of the Army civilians.

Now you could be forgiven for thinking that this episode might be a monologue. After all, there's more than enough to say about the Golden Knights. Well, Airspeed went the extra mile (actually a few hundred of them) and we’re about to take you up 12,000 feet strapped into a canvas seat just a few feet from the open doors of the Golden Knights Black Team's Fokker C-31A Friendship. No ground interviews here. We're talking to fully-suited and rigged Golden Knights just minutes before they exit the aircraft. Wind noise, near-freezing cold, and the whole ball of wax. Yeah!

A couple of notes here. The only thing harder than beating a Golden Knights competition team is getting the recording levels right. The stuff in the airplane is hard enough with the engine and wind noise. The ground briefing was tough, too. The jump aircraft was parked at the end of the runway that served as the show line. This was not the active runway, so there were no takeoff or landing operations on it, but we had lots of fly-overs and explosions from the bomber flyovers. Although I didn't record it, we had two flyovers by a Mig on full afterburners at 200 feet overhead. All of which is by way of excuse for the problems with the levels and not in any way a complaint.

I’m going up in the team’s Fokker C-31A Friendship (the military version of the Fokker F-27). The aircraft is 77 feet long, 28 feet high at the tail, and has a wingspan of 95 feet. Power is courtesy of two 2 Rolls Royce Dart 7 Engines. It’ll do 300 miles per hour and has a maximum payload of 12,000 pounds out of its maximum rated takeoff weight of 45,000 pounds. When it’s not carrying the Golden Knights for demonstrations, the aircraft can be configured to carry 56 infantry troops, 50 fully loaded paratroopers or 24 litters. Standard crew is three personnel and it’ll go 1,500 miles before refueling. Today, the aircraft is configured with several rows of standard seating up front and then an open space for the last two thirds of the fuselage with canvas sling benches along the sides. Both doors are open from takeoff to landing.

So let's get the pre-flight briefing. At this point, I'm in the tail end of the aircraft a few feet from the open doors. This is where I'll strap in in a few minutes. The doors measure something like five feet by five feet and there are two of them - one on each side at the back end of the passenger and cargo area. The briefer is Cpl. Josh Coleman. Coleman enlisted into the Army in September 2001 and has completed one tour with the 82nd Airborne Division, Fort Bragg, N.C., with whom he deployed to Iraq for eight and a half months in support of Operation Iraqi Freedom. He’s in his second year with the Golden Knights. He has more than 890 freefall parachute jumps in his logbook. 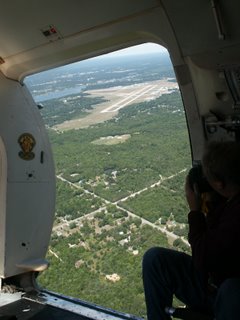 I strap in and we're soon rolling. The jump team suits up in the plane and they're seated along the walls as we taxi. I take the opportunity to interview Sgt. Jared Hall, who's sitting next to me. Sgt. Hall enlisted in the Army in September 1992. He served tours of duty at Fort Campbell, Kentucky from 1992 through 2003. After completing the Golden Knights Assessment and Selection Program in the fall of 2003 he was ‘knighted’ and assigned to the Black Demonstration Team. He is in entering his second year on the team and has completed more than 1,150 freefall parachute jumps. The interview is interrupted by takeoff and we finish up during the climb. 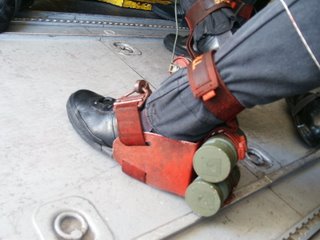 Shortly after that, the knights are roaming about the plane talking about the jump and getting the plane's ground track dialed in. They toss streamers and spend a fair amount of time on hands and knees with their heads out the door looking down.

It stays noisy and gets cold. I’m wearing a fleece vest, but I’m also wearing shorts. My legs are cold, but my central body is fine. It’s my fingers that get bothersome because it’s hard to work the MP3 recorder and the camera. 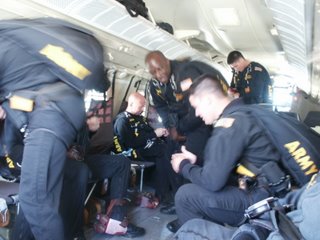 Specialist Ben Borger sits down next to me and we have a chance to talk. Since joining the Army in 2001 he has earned his combat infantry badge, expert infantry badge, airborne qualification, air assault badge, and combat life saver’s badge. In 2004-2005 Borger deployed to Iraq in support of Operation Iraqi Freedom.

A few minutes later, we're over the target. The narrator goes first. I didn’t have the chance to ask his name on the aircraft, but I’m pretty sure that it was Sgt. John Ewald. My apologies in advance if I’ve misidentified him. Ewald is a cavalry scout in his third season with the team. He has been skydiving since May of 2000 and has 1,300 freefall parachute jumps and five military static line jumps. And lest you think that Golden Knights demonstrators jump out of airplanes because they can’t fly them, Sgt. Ewald has a degree in aviation management and is a pilot with more than 500 hours. 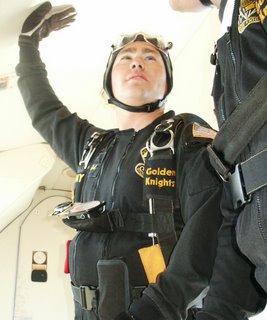 Ewald readies himself by the door facing forward. At the appointed moment, he side-steps out, legs straight, elbows out, and hands up. For a split second, he's there outside the door next to the airplane, hanging there Wile-E-Coyote style. And he's grinning.

Then he's gone. That fast.

The other thing that gets you about watching this is that the environment inside the plane is a lot different from outside. Yeah, it’s cold and noisy, but it’s also comparatively dark and it’s – well – inside the plane. When Ewald steps out, it’s like he’s going from the shadowy world of preparation and waiting into the bright and instantly energetic world of performance. It’s like he and his environment are instantly painted in bright colors and energized from the prop blast and more than two miles of gravitational potential energy about to be released.

That’s a lot of thought for something that lasts only a second. And I do mean a second. He’s gone immediately and you kind of find yourself looking out the trailing edge of the door. I’m glad that I was strapped in, because I really had the urge to get up and go look out the door. Not that I would have, but it’s good to be strapped in.

Then we circle around and get ready for the next run over the target. All seven remaining team members make their ways to the back of the aircraft. There are ritual shouted declarations and gestures. Not a few times, a team member stops a fellow jumper and looks over his gear. These guys are serious about safety and teamwork and nobody shows even a hint of ego about being checked over by a fellow jumper. 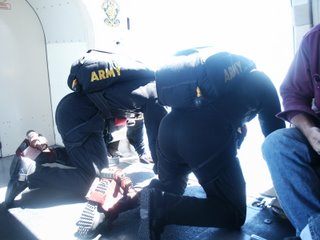 Then they’re formed up at the doors. This is the audio. It’s really hard to tell what’s going on, but I can tell you that being there doesn’t necessarily give you a feeling of understanding it all, either. Just like Ewald’s jump, it’s over very quickly. You’re going to hear a few shouts, then a ready, set, go! The change in the background noise for about a half second is the change in the wind dynamics resulting from seven guys diving out into the slipstream at once. Then it’s over. Seven black-clad forms are suddenly painted with bright daylight and then they’re gone.

Then it’s just you, the crew chief, and the pilots. The crew chief isn’t wearing a parachute, so he mostly keeps to the front of the aircraft. The pilots stay up there, too, for more obvious reasons. You descend and land about 15 minutes later.

I don’t know if the Golden Knights plan it this way, but you have time to think about what you just saw. As the air gets warmer and the houses get bigger, it dawns on you that there’s more to it than just a demonstration for an air show. The jumpers aren’t always greeted by a blast of sunlight and clean Lake Michigan air. Sometimes it’s dark. Sometimes it’s turbulent. Sometimes it’s not a festival of aviation enthusiasts waiting on the ground. Coleman, Borger, and others have done tours of duty in Iraq. Every Golden Knight is trained as airborne infantry and is on call to go into harm’s way if the country calls upon him or her. These are committed and talented individuals who put their lives on the line in more ways than one and my hat’s off to them.

Hear the audio at http://www.airspeedonline.com/AirspeedGoldenKnights.mp3.