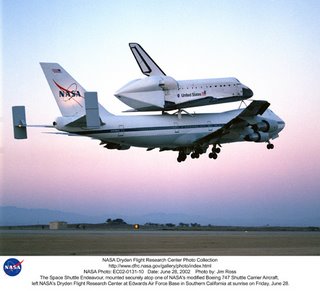 Welcome to the second episode in our two-part series covering the modified Boeing 747s that NASA uses carry the space shuttle orbiters when they need to be repositioned between Edwards Air Force Base in California, Kennedy Space Center in Florida, and other locations.

We talked about the basics of the Shuttle Carrier Aircraft, or "SCAs" in Part One, in which we also interviewed SCA crew chief Pete Seidl. If you missed that episode or if you're a recent subscriber, please be sure to download that episode as well.

Today we're going to talk to one of the pilots who flies NASA's SCAs.

To say that Gordon Fullerton is an SCA pilot would be true, but to stop there would be to fail to outline as rich an aviation and aerospace career as anyone could claim.

He's presently associate director of flight operations at NASA's Dryden Flight Research Center in Southern California. In addition to flying the SCAs, his assignments include a variety of flight research and support activities piloting a variety of multi-engine and high performance aircraft.

Fullerton entered the U.S. Air Force in 1958. After primary and basic flight school, he trained as an F-86 interceptor pilot and later became a B-47 bomber pilot. In 1964, he attended what is now be called Air Force Test Pilot School at Edwards Air Force Base and was later assigned as a test pilot with the Bomber Operations Division at Wright-Patterson Air Force Base in Ohio.

While still in the Air Force, he went on to become a NASA astronaut and served on the support crews for the Apollo 14, 15, 16 and 17 lunar missions.

The voice there saying "Roger, you have good thrust" is Fullerton, who was the man at the CAPCOM station in Houston for Gene Cernan and Jack Schmidt's liftoff from the Taurus Littrow Valley as part of Apollo 17 - the last manned mission to the moon.

In 1977, Fullerton joined one of the two two-man flight crews that piloted the Space Shuttle prototype Enterprise during the Approach and Landing Test program, which involved flying the orbiter to altitude on an SCA, separating the orbiter from the SCA, and then gliding the orbiter to a landing to validate landing procedures.

Fullerton logged 382 hours in space during two space shuttle missions. He was the pilot for the eight-day STS-3 orbital flight test mission in 1982. STS-3 landed at Northrup Strip at White Sands, New Mexico because Rogers Dry Lake at Edwards Air Force Base was wet due to heavy seasonal rains. He was also the commander of the STS-51F Spacelab 2 mission in 1985, which landed at Edwards.

Since joining Dryden as a research pilot, Fullerton has piloted nearly all the research and support aircraft flown at the facility and currently flies the center's Beech King Air 200 as well as the B-747 Shuttle Carrier Aircraft.

We started the research for this episode intending to focus on the SCAs themselves. We were delighted to have access to one of the pilots of these magnificent machines. But we had no idea when we submitted the initial inquiry that that we'd end up talking to a man whose career has been so intertwined with the space program and the national dream that has captured so many imaginations. With your indulgence, then, we couldn't help also asking Gordon for his thoughts about the space program - where it's been and where it's going.

We caught up with Gordon by phone at his office at NASA's Dryden Flight Research Center in Southern California.

Image used per NASA's policy entitled Using NASA Imagery and Linking to NASA Web Sites (October 13, 2005) located at http://www.nasa.gov/audience/formedia/features/MP_Photo_Guidelines.html. NASA does not endorse Airspeed or any commercial good or service associated with Airspeed.

See more pictures of the SCA at http://www.dfrc.nasa.gov/Gallery/Photo/STS-Ferry/index.html.

[color=red]The Most Affordable XRUMER/BACKLINK SERVICE Online!
The EFFORTLESS and POWERFUL WAY TO BUILD MASSIVE # OF BACKLINKS
[color=black]
200,000 BLASTS of your URLs+ Anchor Tex, message, pictures (can be spinned) etc
$10 USD (shared with other clients like a carpool), or
$25/200k for exclusive!(you control EVERYTHING)
$50 Exclusive @ 500,000 blasts.
(Complete reports will be given to clients)

[IMG]http://img697.imageshack.us/img697/1540/arrowdownh.gif[/IMG]
For orders, questions or concerns? Email: [u]formless.void47 at gmail.com [/u]
Note:
1. For STRICT Whitehat sites, it is advised to create buffers to pass on linkjuice. i.e. social bookmarks, cloaked pages etc.
You can blast the site directly, but it entails risk.
Using buffers are 100% safe, speaking from experience.
2. Xrumer is a very technical tool. Just describe to me what sorts of effects you want and well make it happen!
If you want to buy Xrumer?
>>>>> http://cloakedlink.com/chzgykebsd <<<<<<