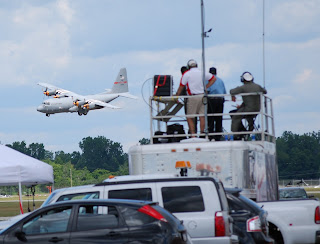 This is a regular blog post. Looking for show audio or show note? Please check out the other posts.

Took the kids to the Yankee Air Museum’s Thunder Over Michigan airshow today. Based at the historic Willow Run Airport a few miles west of Detroit Metropolitan Wayne County Airport, this is a slightly schizophrenic show that I usually really like.

It tends to be a smaller show that’s heavy on warbirds and particularly on WWII bombers. The coolest thing is that the aircraft are usually parked on the ramp where you can walk right up and (after asking) touch them. The mix of aircraft varies a lot from year to year. If I have a criticism of this year’s show, it was the dearth of P-51s on the ramp. But, in fairness, there were more bombers and I had the opportunity to get in the museum’s C-47 Skytrain and to talk to the chief C-47 pilot about helping out on air crew ops. Turns out that they only use ATPs for flight crew, but I got invited to come to the flight crew's ground school on March or April.

Last year, the show landed the Blue Angels, which changed the entire character and vibe of the show. No ramp walk other than an admittedly cool lineup of B-25 bombers (like more than 20 of them). But it was otherwise a bust as far as I’m concerned because it was 95+ degrees, 90% humidity, no chade, lots of outsiders who had never been to the show in the past, and I had to lug the wagon with the kids in it over a couple of miles of grass.

The Yankee Air Museum’s all-wood WWII main facility burned down several years ago and having a big show with the Blues there was certainly good for raising money toward a new facility. I can’t begrudge the museum that. But it changed the character of the show completely and I left after 90 minutes without even watching the blues. I couldn’t get fluids into the kids fast enough and they were each wilting rapidly.

But this year was a return to the Thunder Over Michigan shows of old. I love to wander around the grounds, dodging from shade to shade under the wings of warbirds. We left the wagon at home this year because Ella is not 3-1/2 and can walk around the grounds very well. And as long as there are a few jets flying (they had F/A-18, F-16, and MiG-17 demos), that fully justifies a Saturday afternoon for me. 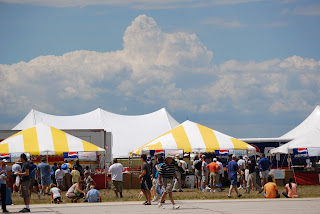 The weather was a little weird. About 75 and breezy with high cloud cover most of the day. Lots of vertical development, as you can see here, but no real precip and the ceilings stayed very high. If any of the jet demos had to fly a flatter show than usual, they didn’t say so and I didn’t see any reason to think that they had to. The F-16 got into the clouds a little at the top of his verticval rolls, but he had plenty of room to maneuver before that.

Rotten for photography most of the time. I might need to get a polarizing filter for the 200 mm lens to make the aircraft pop a little more against the clouds. The clouds were pretty cool-looking and I would have loved to catch a feew aircraft in sunlight against the angry-looking clouds. Alas, it was not to be. 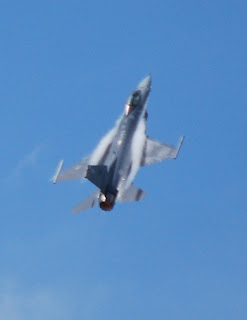 Among the highlights was the best F-16 demo I think I’ve ever seen. Maj George “Dog” Clifford of the Viper East demo team really put the Viper through its paces. I think the weather must have been just about perfect for making those Prandtl-Glauert condensation clouds around the leading surfaces and around the airframe. That and I don’t think I’ve seen a Viper drive pull as much in a demo in a long time. There was a point where I thought that the white appearance of the wings along the fuselage was a part of the paint job, so much was Dog pulling and so often were the clouds present. I only figured out what was going on when I zoomed in on a couple of the images using the camera’s LCD screen. Really cool!

I captured audio of most of the demo for later posting on the show as a part of the upcoming “Airspeed Virtual Airshow.” More on that later. And follow me as StephenForce on Twitter for early details. 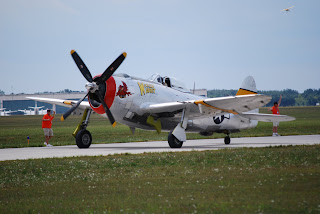 Here’s Republic P-47D Thunderbolt NX647D Wicked Wabbit. It was a part of a four-ship demo flight at the event. Orange-shirted Yankee Air Museum volunteers marshaled the formation expertly and parked them near the show line. Would have preferred to see them on the ramp and maybe they moved them there after the F-16 demo. Not sure. 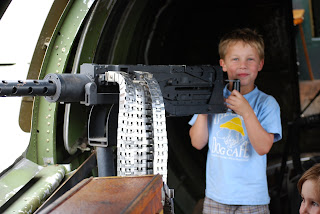 Cole’s favorite aircraft of the day? The B-17F “Movie Memphis Belle” that stood in for the real Memphis Belle for the 1990 movie starring Matthew Modine and others. I think he wants to be a waist gunner when he grows up.
Posted by Stephen Force (Steve Tupper) at 11:48 AM