Thunderbirds Ride Debrief - Things I Might Have Done Differently 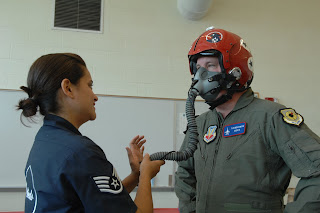 This is a regular blog post. If you’re looking for links to show audio or show notes, please check out the other posts.

(Check out the most recent version of the “single” of Thunderbird Groove (the September 21 version)! The underlying music will be the theme and background for the episode. This "single" version is for starting as you accelerate down the on-ramp in your car or plugging into the aux input in your Flight Design CT and cranking up as you rotate!)

As I put together the grand production that will be the summary episode for the Thunderbirds ride, I’m reviewing all of the audio and video. As I do that, a few things have occurred to me that I’d do differently or to which I’d pay more attention if I had the opportunity. In addition to possibly being entertaining to readers generally, it might also be helpful to future media riders.

Bear in mind as you read this that I’m very proud of how well I did during the ride and very, very grateful to the Thunderbirds for the opportunity. I’m not beating myself up on any of these points. But it’s always good to look back and evaluate. Heck, the jet teams themselves review and deconstruct every flight looking for improvement. Why shouldn’t I?

1. I’d ask for stick time. I was very intent on being a good guest in the cockpit and didn’t want to ask Maj Mulhare for time on the flight controls for fear that I’d put him in the position of having to say no. Having spent some more time on YouTube and other places since the ride, I’ve seen several rides during which the rider gets stick time. I wish I had asked. Especially now that I’ve had more time in the Citabria and have added to the aerobatic experience that I had before the F-16 ride. I’d love to have done a loop. I know that most of the media riders who got stick time basically did rolls and that looked like a lot of fun. But I’d love to have been able to take the stick and do a loop. With assistance from the front seat on the pull and the power setting? Of course! But I wish I’d asked for stick time. I repeat – I’m not beating myself up and in no way was the ride less than sublime. I just wish I’d asked for stick time.

2. I’d have checked the headrest position prior to takeoff. You can see me in the video on the takeoff roll realizing that my head (with helmet) is about to weigh 40 pounds and trying to figure out where to put it for the pull. The aircraft decides for me. I’d check it out upon starting taxi and lay back at about 250 KIAS on takeoff.

3. I wouldn’t have “hooked” as much early on. “Hooking” is, of course, tensing everything from your toes through your calves, thighs, butt cheeks, and abdomen and breaching in short three-second exchanges, the better to keep blood in your noggin. “Hooking” because it helps to say the word “hook” (heavy on the “k” at the end) to shut off the breath you just took and use it to tense. I think I missed out on some of the conversation with Maj Mulhare because I didn’t know what to expect in terms of gee load at various times. I basically started hooking every time the airplane gave me a hug (i.e. when the gee suit started inflating). It resulted in come of my responses sounding more tense than they needed to be. I’d have sounded a little more macho and in control if I’d have just relaxed through everything other than the nine-gee pull. Don’t get me wrong. You’re going to need to hook your head off to stay conscious during the nine-gee pull. I got down to about 20 degrees of usable vision in the center with everything else black as night and leprechauns and unicorns dancing around in that narrow little 20 degrees of what I had left. But I think that one could relax a little and only strain when told and be absolutely fine. Remember that your heart will usually keep blood in your head up to about four gees and they’re not going to hit you with more than that without a little warning.

4. The ATC radio (COM 1) turned out to be mixed very high in the overall audio loop, but I couldn’t hear it very well. I could hear Maj Mulhare well, but realized only after listening to the audio that I was talking during ATC communications and that Maj Mulhare probably couldn’t hear me very well. It’s actually probably just as well because I later realized that there was a fair amount of negotiation with Chicago Center about whether we’d be able to use the Hersey MOA and I would have freaked out at the though that we might get to the aerobatic space and not be able to maneuver. In any case, I would have asked how the audio mix was up front and whether I was balanced well with both COM radios.

5. I’d have sat up a little straighter for most of the ride. The F-16 cockpit has you reclining about 30 degrees, but you can have your head up a little more than that. It kind of makes you look more like a rag doll than you probably are if you’re reclined more than you have to be.

6. I’d have locked my shoulder straps for the whole ride. It’s true that you don’t really need them much and it’s not necessary to lock them for safety of the ride. But you do dangle a little more than is comfortable when you’re inverted in the slow roll and you get tossed around a little more than you otherwise would in the four-point- and eight-point rolls and at the end of the four-roll series. It’s dramatic and kind of cool to see me rise in my seat with the zero or slight-negative gee, but I’d rather look more like a steely-eyed fighter pilot with only my noggin whipping around. It also would have made grabbing the towel racks a little less inviting or necessary.

7. I wouldn’t have grabbed the towel racks as much as I did. The towel racks run horizontally along the longitudinal axis on either side of the lower part of the canopy. If you’ve seen the inside of an F-16D cockpit, it will me immediately obvious and unmistakable why they’re called towel racks. Nothing wrong with grabbing them. But you just don’t look as much the steely-eyed F-16 driver if you’re grabbing them. You’re clearly a passenger. If you keep your hands in your lap or on the tops of your legs, they’re off camera and it’s easier to imagine that you’re actually flying the aircraft.

8. I’d have had something witty to say at the end of the nine-gee pull to demonstrate to Maj Mulhare and the audience that I had come through conscious and happy. I actually made it through quite well and I can see mu chest rising and falling continuously with each hook all the way through. But I hadn’t come up with something to say to demonstrate it. “I’m conscious” would have seemed boring at best and defensive at worst. You’re a little busy getting ready for the pull, so you need to have something already thought up and ready to go. “Is that all you got?” might not have been appropriate, but something witty would have been nice.

I’ll probably add to this post as time goes on. I hope that this is helpful to any future media rider or to anyone trying to get further into my head to figure out what is was like. It was a singular experience and I think you’re going to like the summary episode when it comes out.

Thanks again to the USAF Thunderbirds and Maj Tony Mulhare! If the episodes so far aren’t testament to the impression that the ride made, the music and the upcoming episode (and the fact that I’m writing about it almost three months after the fact) should be. Man, what a ride!
Posted by Stephen Force (Steve Tupper) at 2:51 PM

Thanks for the list of What You would have done differently! I'm sure it will help me if I am lucky enough to get a media ride with the Thunderbirds over the next few weeks. I will talk to you soon.