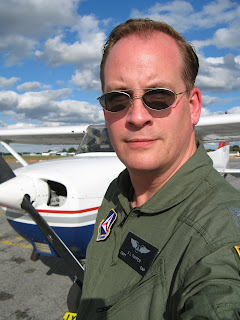 Got up for 2.9 hours of flying with Capt Norm Malek, the operations officer of the Oakland Composite Squadron of the US Civil Air Patrol (GLR-MI-238 – my home squadron). Norm got his instrument rating a little more than six months ago and had fallen out of currency. So he needed six approaches, interception and tracking, and a hold. And a safety pilot in the right seat.

Hey! I know a good safety pilot! And he’s got a new zoom bag that he needs to break in! 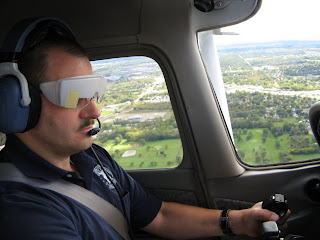 So Norm and I saddled up on Friday to go build some cross-country time. I handled the right-seat duties and Norm shot the approaches. Turned out that I was reasonably useful. I like to print off the approach plates from the FAA’s website and staple them together by airport, then by runway, then by precision. It makes for a clean cockpit.

And I’m pretty good about setting up efficient sequences of approaches. Like shooting the ILS 27 at KFNT and following it with the VOR 18 at KFNT. You don’t have to fly all the way back outbound to get to the start of the approach and it gets you a different approach to a different runway while shooting you out to the south to set you up for a right turn to KLAN.

We did KYIP KFNT KLAN KJXN KYIP with two approaches at each of the first two (including the published miss and hold for the VOR 24 at KLAN) and one each at the other airports. We stopped at Jackson to refuel and to both give to, and receive from, the local water table. 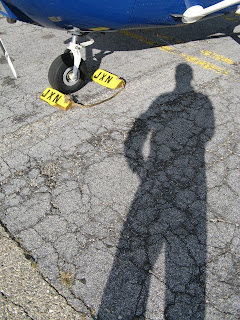 I really enjoyed this flight. First, Norm’s a good friend and it was great to get some time aloft with him. Second, I’ve never been safety pilot for anyone and it was cool to have the experience of just looking around and scanning for traffic without having to think a lot about navigation and other stuff.

Third, and most surprising, it was really cool to watch six instrument approaches on a VFR day. I don’t think I shot any approaches without the hood during my instrument training, which turned out to be a lot like doing one’s rating in Plato’s cave. You rely on the shadows of the gauges for directional information and get to look up briefly at the end, but that’s about it. You really need to shoot a couple of approaches early in your instrument training where you can see what it looks like out the window. How can one really expect to have any situational awareness if one has never actually seen what the approach looks like out the window?

I’m looking forward to getting out and getting a few approaches in before the snow falls. I’m current as of September 10, so I have plenty of time, but it’d be cool to get out and just go shoot a few for the heck of it. And to do so in a cherry, well-maintained CAP C-172R.

Also, I broke in the new zoom bag! I just became flight-qualified for CAP by taking the Form 5 ride in August. And, thereby, received the privilege of wearing the flight suit. Is it wrong for a male human to love a garment this much? It fits nicely. It’s sage green. It has a leather name patch with wings on it. Nice shiny captain’s bars on the shoulders. Command patch, wing patch, and US flag patch. And a morale patch. I think I’ll cut off the pocket flap now, being that I’ve worn it aloft.

Got to love the Civil Air Patrol! Flight suits, wonderful aircraft, and solid colleagues. If you’re not in CAP, you’re missing out!