Post-Holiday Phase - On with Planning for 2009! 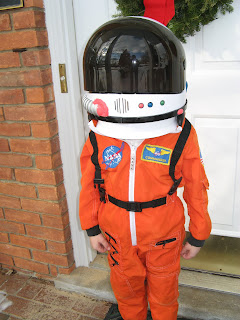 New blog header image, first officer gets a tricked-out helmet to go with his STS pressure suit, I finished up the year at the office with a little to spare, and I can finally pull my head out of my butt and start planning in earnest for the coming year of aviation.

As many of you know from following along for the last couple of months, I’ve been pretty grim about the mouth (thanks, Herman Melville!). That’s the way it usually works in my law practice. I slack a little in the first nine months of the year and then face a massive push at the end of the year to get all of my work done. The annual member’s meeting in Chicago and being sick a couple of days in November didn’t help much and I ended up facing (and completing) the biggest December of my career.

But the good news is that I got it all in and, with any luck, I’ll bonus sufficiently to be able to afford some really cool flight activities this year. So, yeah, it’s worth it.

Lots of stuff in the pipeline.

I’ll probably start the transition training to fly CAP’s C-182 with the G1000 out of KPTK. That’ll probably begin very soon. Probably a session or two on the ground, then we get into the air.

I might well head down to Griffin to do my recurrent training for the DC-3. If I do, I’ll probably go get some time in the Sky Arrow 600 to the north of Atlanta while I’m down there.

I’ve been invited to C-47 ground school at the Yankee Air Museum in March or April and will likely go do that.

I’ll keep on training with Barry in the Citabria for Aerobatics and additional tailwheel competency. Sutton also has a Super Decathlon on the line that we’re going to go fly soon. It has a smoke system (!) and, although Barry says that doing smoke makes the airplane dirty, I’m going to offer to buy the smoke oil and wash the plane if we can go fly with smoke at some point.

I’m planning to fly my mom somewhere while I’m at Jekyll Island this March. Probably go for a $100 hamburger or something. Should be fun.

I’m planning on five airshows this year, including Sun-N-Fun (Ella’s airshow debut) and Oshkosh. I’m also very excited about adding the Indianapolis Airshow this year. Roger Bishop has some really great plans for Indy and for the time surrounding that show, and I’m going to get him on the sow to do the annual airshow prep episode.

There’s lots more as well. I’m really excited about the upcoming year. I hope you are, too. I’ll see you out at the airport!