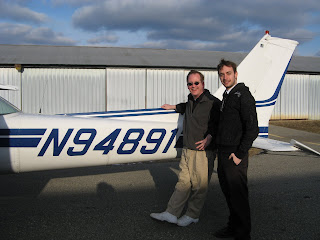 This is a regular blog post. If you’re looking for show notes or show audio, please check out the other posts.

The day started out with me coming in to the office with a suitcase in the car and plans to bug out for Hillsdale at 10:30 to train that afternoon and Saturday morning in the FlightDesign CTSW. There was a decent hole in the weather and I was looking forward to flying something after not having flown since the CAP Form 5 ride on the 8th.

Then the call. The instructor sounds like nine miles of bad road and tells me that she’s deathly ill. And it looks like we’re going to get eight inches of snow Saturday. From pretty excited about flying to facing another day in the office. Crap!

But lo! Is there not another opportunity? Yes! I call Solo Aviation at Ann Arbor. Might N94891 and an instructor be available this afternoon for a checkout? Yes, you say? I’ll be there at 3:00!

Long story short, yesterday I flew the C-152 that I first soloed back on July 14, 2001 and last flew in August of that year.

I had originally planned to go fly her a few weeks ago, but the weather conspired to keep me on the ground. Nevertheless, I sat down with CFI Joe Politowicz that day and did the airplane questionnaire and filled out all of the paperwork so that I’d be good to go the next time.

Which, of course, was this time.

I arrived early, pleased to find that Joe was going to do my checkout. Interestingly, Joe was on a search and rescue mission in 891 when I showed up. A couple that was dog-sitting for their children had inadvertently lost the dog and Joe was up with one of them, flying the aircraft over the southwest part of town while she spotted the dog and the rest of the ad-hoc ground team tried to find the dog on the ground. The aircrew had actually found and tracked the dog at a couple of points and was directing the ground team toward the dog, but ultimately to no avail.

I couldn’t help immediately recruiting the entire group for Civil Air Patrol. If they can coordinate an air and ground search for a dog running around Ann Arbor, finding downed aircraft should be a cinch!

1.0 hours with slow flight, steep turns, stalls, and four takeoffs and landings. It was a cold day, we departed with only 16 gallons of fuel, and 891 has since been fitted with a great climb prop, so climb performance was virtually indistinguishable from that of the 172s I’ve been flying. Light chop up to about 1,000 AGL and it was clear that we were in a smaller airplane, but not annoyingly so.

The real differences were in the sight picture and in stability. I did some turns, climbs, and descents to get used to the airplane, and then we slowed up for slow flight.

I did amazingly well with the slow flight for having to essentially guess at power settings and pitch sight picture. Got her down below 40 knots and she just stayed there. I has a few altitude excursions of about 100 feet either way, but minor adjustments in power took care of that. Additionally, when I was low and had to get her back up, I didn’t have to claw for altitude like I seem to have to in the 172. Just a little more power and she came right back up without having to worry too much about bracketing the airspeed. I find (and maybe it’s just me) that, when you’re on the back side of the power curve in a 172 and you get low in slow flight, you give it more gas and everything else wants to change. With 891, I changed the power, everything else stayed essentially the same, and she was back on altitude more quickly without having to get everything else back under control.

I also noticed that I really didn’t do much at all with trim. I’ve lately really concentrated on trying to trim hands-off every time I change anything. It makes flying on instruments a lot easier if the airplane is trimmed out. But trim didn’t seem to make much difference in 891 and I ended up just varying pitch by minor changes in yoke pressure.

In the stalls, and somewhat in slow flight, 891 really reminded me of what made me leery of 152s as opposed to the Cherokees that I had been flying immediately before going to Air One Aviation in 2001. As compared to any other airplane I’ve ever flown, the 152 really wants to drop a wing when it gets slow. You need to be on your rudder pedals if you’re going to stall a 152. Good to learn with any airplane, but you have to have those skills solid in the 152. In each stall, she immediately started dropping a wing. The ailerons were complete mush each time and I recovered the wing drop with top rudder each time. Nothing extreme, but it’ll remind you of how important coordination is.

By the way, I’ve found that “top rudder” is a good rule for recoveries of this kind. If you’re stalled or nearly so and beginning to roll and you want to have just one rule to remember, “step on the sky.” In the stall, your ailerons are almost useless or, if they are useful, they can have the effect of accelerating the stall if used incorrectly. The rudder is your most useful remaining control surface. I put that to good use in 891, just as I did when Don Fuller was instructing me in it. When she dropped the wing in the stall, I just caught it with the rudder while powering up and pushing the nose over.

The cold day and the climb prop meant that we were way nose-up in the power-on stall when the break came. I only used about 80% power and didn’t wait for a full break to recover. I didn’t want to try a tail slide in the airplane.

Back to the pattern. She’s a sweetheart in the landings just like I remember. Wind was about 10 knots and about 40 degreed off to the right with some gusting. We kept it to 20 degrees of flaps where we used them at all. One normal landing, one pinpoint (which I think I got within about 40 feet of the numbers, although I dropped it pretty hard), one no-flap landing, and one victory lap.

Joe was a joy to have in the right seat. He’s an Airspeed listener and was kind enough to bring up a couple of episodes while we were getting ready to fly. He’s also a good instructor. Relatively few instructors take the time to develop a solid understanding of who’s going to do what in the cockpit and to lay out the mission profile before you get into the airplane. I spend a lot of time talking about how primary students and instructors interact, but rarely talk about how CFIs interact with more experienced pilots. Joe was quick to offer suggestions for flying the airplane, but just as quick to say that, if I had learned something differently, any technique that I used that was reasonable and safe was fine with him.

I was all about hearing suggestions. After all, it had been years since I’d flown a C-152.
So we ended up having a really productive flight. I got really helpful coaching and suggestions at important phases of the flight. I rejected a couple of the suggestions at the time (e.g. bleeding off 200 feet on downwind before turning base) because I was busy and in a flow, but Joe’s the kind of guy that you can tell that you’re going to fly it your way this trip around because you’re busy and pick up his suggestion on the next time around. He took that just fine and I tried it out on the next trip around the pattern. And he was right.

I’ll fly with Joe any day of the week. Good instructor, good communicator, and solid human.

And I’ll fly anything on the line at Solo. Great staff and well-maintained airplanes. I saw at least two primary students while I was there and overheard one’s ground lesson and was pretty impressed with what I heard.

None of the landings were what I’d call beautiful, but they were all safe and competent and gave me the feeling that I could make them beautiful with a little more practice in the airplane.

Joe signed me off to rent her whenever I want to for the next year. That’s really nice. I don’t know how much I’m actually going to be back in Ann Arbor and have time to go fly 891, but it was really wonderful to go back up and become reacquainted with this stalwart pilot-maker. How many other first solos have happened in 891? How many other cross-countries and checkrides? I’m really just a passing occupant of the airplane, but I’ll sing her praises long and loudly.

What airplane did you first solo? Where is it now? Do you miss it? Does it miss you? If you’re looking for a quest this summer in addition to a new rating or a unique $100 hamburger, try looking up the airplane that you first soloed and go get reacquainted. I did, and it was a great time!

I just started my lessons with 891 this week. Seems like a smooth flyer!

I'll be putting your advice to use in my next lesson, which will cover stalls. Thanks!