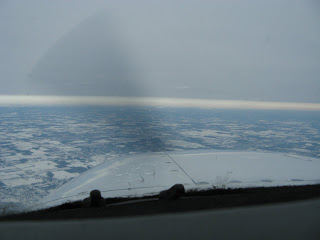 This is a regular blog post. If you’re looking for show notes or links to show audio, please check out the other entries.

2.5 yesterday KPTK-KMBS-KPTK. I’m seriously considering the commercial certificate, but I have very little PIC cross-country time to places more than 50 nm away. Partly because I got my instrument rating under Part 141, which doesn’t require PIC cross-country time. So I started the day with 22.6 and ended with 25.1.

Even if I’m just going to go out and maneuver, I’m making a real effort to try to touch someplace more than 50 nm away every time. That usually means Saginaw (KMBS). The weather tends to come in longitudinal fronts so, if it’s clear at Pontiac, there’s a decent chance that it’s clear on the way to Saginaw. Or at least a better chance than there is that it’ll be clear somewhere to the west. (I have no problem with east as a cardinal heading, but east for me is Canada and the attendant administrative hassles.)

This is also my third flight in the 172RG. I’ll have the 10 hours of retractable time required for the commercial done in the next flight or two, but I think I’ll probably fly this aircraft for the checkride (whenever that happens), so I have no problem getting a lot more time in it. 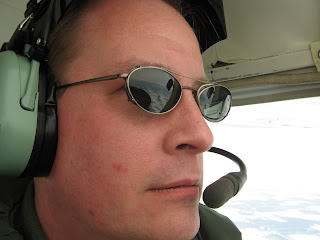 The other objective was to go see the commercial maneuvers and, in particular, chandelles, lazy eights, steep spirals, and eights on pylons. We haven’t has ceilings that would allow for these maneuvers on any of my prior scheduled flights this year in the RG, so I was really pleased to finally get to do them.

As many of you know, I’m not a natural pilot. I’ve had to really work hard to get the maneuvers right. The instrument rating was easier for me than the private, believe it or not. I just don’t have a good kinesthetic sense. Or at least not the kinesthetic sense of the 23-year-old CFIs with whom I so often fly. Punks! (Extraordinarily talented punks that I greatly admire, by the way.)

So I was really pleased by my performance yesterday. Yeah, I have some polishing to do on a lot of the maneuvers, but I actually flew them reasonably well! I think I love lazy eights. Everything changing in all three axes, but changing at rates and with relationships that you command. And Chandelles are just plain majestic on a cold day when you get really nose-up and climb with brute strength.

Maybe I got the kinesthetic sense after all in a weird way when attitude instrument flying finally clicked for me. I do attitude instrument flying very well and maybe the hood made me pay attention to what was going on empirically (according to the gages) so that I can nail stuff like that now VFR. Even with the distraction of a view out the window!

Anyway, I can see a lot of trips to Saginaw in my future, as well as training for the commercial maneuvers. I have a lot of time to build before I’m qualified to do the checkride, but hey – it’s flying. Please don’t throw me in that briar patch! 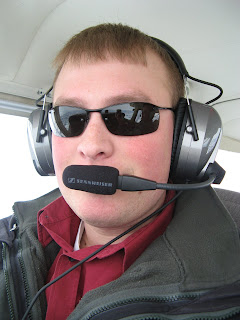 This is the thi9rd different CFI I’ve had in three flights in the RG. Everyone’s a little different in terms of how he or she flies and teaches and that’s fine. But I need to come up with my own checklists and flows for this aircraft.

More than once I had an issue with the gear. Nothing huge. I don’t think that I would have landed gear up. But nearly-as-stupid things like wondering why climb performance sucked so badly after recovering from eights on pylons and heading for home. And then having Dale remind be that we could bring up the gear if we didn’t want to dangle them all the way home.

I do fear the gear-up landing. For myself, I know that mistakes like that are usually task overload. And the best thing for that is to have checklists that I understand and that I can run every time. I think I’ll clear up the gear thing and lots of other issues (prop, carb heat, clearing the engine, and other things that I missed at various times) when I can really sit down with all of the information I’ve received from those with whom I’ve flown the RG and put together my own checklists.

Dale had a particularly good flow. Red, blue, green. Red for the mix, blue for the prop, and then green for the gear-down light (and look out the window for a wheel). Probably easier to remember than GUMPS for that airplane. Anyway, I’ll integrate the best of the pest and go from there.

CAP Form 5 for round-gage instruments scheduled for Sunday at Ann Arbor (KARB). I’m going to go back to DCT Aviation and fly some sim on Saturday to prepare, but I think I have a pretty good chance of passing. We’re flying a C-172R, N992CP (CAPFLIGHT 2028) and CAP SM Scott Gilliland will also be doing his VFR Form 5 that day.
As you might recall, I got Form 5'ed VFR-only in August. They had a C-172P for the check with a panel that I'd never flown. I didn't want to try to do a full-up instrument checkride on a strange panel, so I elected to go VFR only. Now that I have the chance to fly a C-172R (in which I have something like 80 hours in model and five hours in this particular aircraft), I feel good to go for the instrument ride. It has an Apollo GPS, which which I have only the most rudimentary VFR experience, but we're not going to be flying any RNAV approaches. Still, I like having the instrument approach overlays for situational awareness and I need to get through the manual before Sunday to see if I can get that part down.

I did the weight and balance and, as long as we launch with 30 gallons of fuel or less, we can probably fit all three in the aircraft. Might be cool. I haven’t ridden in the back seat of a C-172 since I was a kid. Might be nice to see someone else fly for a change. Of course, that means a peanut gallery for my part of the ride, but Scott’s a good guy and will probably remember to reposition his mic before laughing out loud.

Administering the ride will be check airman Capt Alex Craig, who has solid aerobatic and other credentials and flies a Bonanza when he’s not serving with CAP.

As always, I enjoy objective tests of my pilot skills. And a CAP Form 5 check is always a worthy test.

Posted by Stephen Force (Steve Tupper) at 7:49 AM