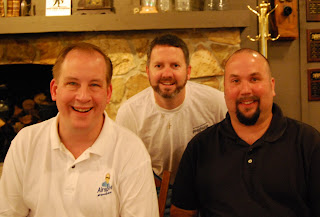 I just returned from annual trip down to Jekyll Island, Georgia to play golf with my dad, my brother, and my best friend. As I do about two thirds of the time, I flew in to Orlando (KMCO) and spent the day Friday at Kennedy Space Center. But not before having breakfast Friday morning with David Allen of The Pilot’s Flight Podlog and Greg Summers of The Student Pilot Journal. Good grub and good hangar-flying with the guys. I’ll definitely try to pre-tweet some upcoming events and have breakfast with more folks as the airshow season heats up. 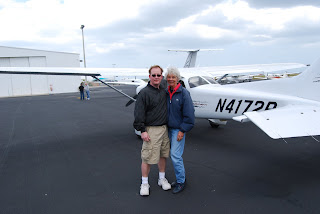 As I did last year, I went to a nearby airport and flew my mom. This time, I flew from Brunswick Malcolm McKinnon Airport (KSSI) on St. Simons Island to St. Augustine (KSGJ) and back. Overcast at around 3,500, so we flew at 2,500 there and back. We picked up flight following from Jacksonville Center and then Jacksonville Approach. I diverted a little from the straight-line path and routed over the Craig VOR (CRG), which helped to give me a boundary so that I could avoid P50 (an insidious little three-mile prohibited area around Kings Island Submarine Base that you really have to think about and know about in advance because it’s right there along an otherwise perfect route of flight). 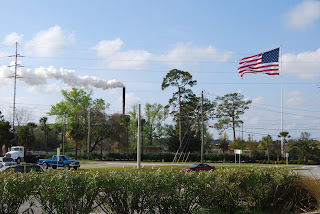 Big winds the whole time surface winds were something like 19 with gusts to 28. The horizontal smoke and the flag here give you an idea of what it was like. Fortunately, the wind was more or less right down Runway 4 at KSSI and right down Runway 2 at KSGJ. By the way, how cool is KSGJ for having, in addition to the big 13/31 runway, approx. 2,500-foot runways at both 2/19 and 5/23? I presume that those two runways are primarily to facilitate lighter GA traffic given the usually stiff winds out of the northeast.

We got down with vary little runway and took off the same. I’m pretty sure that we were airborne within 300 feet on takeoff and I think the airspeed indicator was non-zero when we taxied into position. 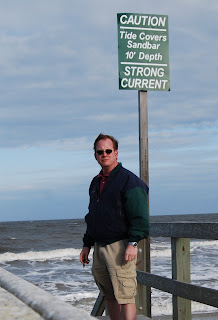 I did a little hanging out at the beach. Mostly in the 50s or 60s with high winds that made it good for light jackets, but you had better be sure that your cigar doesn’t go out while walking the beach because you’re not likely to be able to re-light it in that wind. 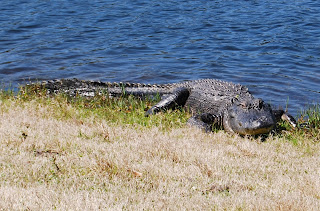 And the obligatory alligator picture. Might be the same one from last year. This six-footer was sunning himself on the Pike Lakes course.

So now I have a pile of stuff on my desk to which I must attend. Busy weekend planned getting some work done, recording a tune for the MacDowell application (due April 15), and scheduling the T-6A flight at Randolph AFB. Busy, but in a very good way!

Posted by Stephen Force (Steve Tupper) at 8:24 AM

I live right up the road from Randolph AFB. T-6's land all the time here at KAUS. Drop by and I'll show you our Gromman AA5B.