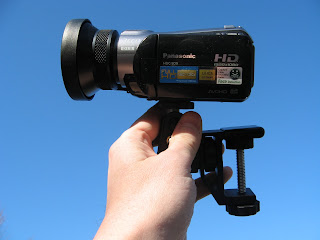 This is a regular blog post. If you’re looking for show notes or links to show audio, please check the other posts.

I’m tooling up for the upcoming season. I wanted to do more video elements for the show, but lacked the hardware to do so effectively. So I decided to, among other things, update my camera rig.

I have initial approval from at least one military source to go fly a pretty high-performance airplane this summer, and it’s the kind of airplane whose crew chief is unlikely to let me run a lot of wires around the cockpit. It has ejection seats, you see . . .

So, with some help from Will Hawkins, I settled on a new rig. The base camera is the Panasonic HDC-SD9. It’s a 12-oz. unit that records high-definition AVCHD video at native 1080i resolution to SD/SDHC™ memory cards with a maximum video resolution 1920 x 1080.

Although I’ve had good luck with tape media thus far in the Citabria (pulling maybe three gees max in usual maneuvering), I do have occasional problems that I suspect are due to the effects of acceleration on the tape transport. Hard drive cameras can also be affected by gees inasmuch as the read-write head isn’t designed to put up with those stresses, either. So I got the Panasonic that has very few moving parts in general and no moving parts in the storage mechanism. 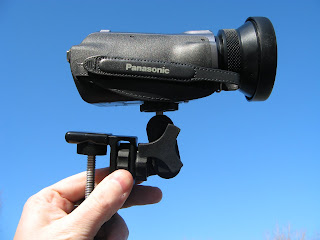 I clamp it into the airplane using a clamp mount that I bought last year from an auto racing supplier. It’s very configurable and can hold the camera still in any number of orientations. It’s configured in this picture to clamp to a horizontal part of the dash, but it works just fine clamped in lots of other orientations.

The lens is a Raynox Pro semi-fish-eye conversion lens. At 0.3x, it broadens the field of view by 180%. This is important. When I first mounted the bullet cam in the front of the airplane, I got video of my face and some moving shadows, but little else. The field of view wasn’t wide enough to capture the cockpit environment to show what was going on. I solved that to some extent by mounting the bullet cam in the back of the plane looking forward, but I still couldn’t get any shots of my face. The camera was just too close. 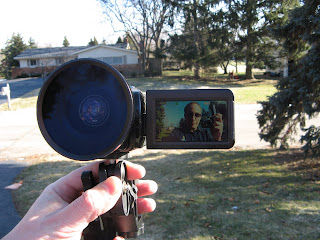 The conversion lens blows the image back a lot and will allow me to shoot from up front, which will be cool. I’ll probably experiment a bunch with placements around the airplane in the next few weeks.

More re-tooling discussion soon! I’m planning to convert my music studio rig to a Mac platform with Digidesign 003 Rack + Factory and Pro Tools LE 8 and I’m sure that I’ll have a lot to say about that as it happens.
Posted by Stephen Force (Steve Tupper) at 7:11 AM

I found this site using [url=http://google.com]google.com[/url] And i want to thank you for your work. You have done really very good site. Great work, great site! Thank you!