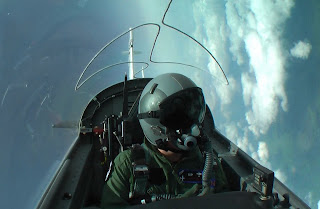 This is a regular blog post. Check out the other posts for show notes and links to show audio and video.

I’m just now getting a chance to look at the video from the T-6A Texan II ride and start parsing out the pieces that are going to be the most useful. It’s also a great way to remember the flight and make sure that I get all of my impressions down so that I can incorporate them into the episodes. I thought I’d post a few frame grabs so that you could see what I’m working with.

The day was fairly overcast, which means that we’re going to have to pump up the color a little in places. That said, we have a lot of great sequences of flying by - and through - big ragged cumulus clouds, and those are going to be great once we make the clouds pop a little better. 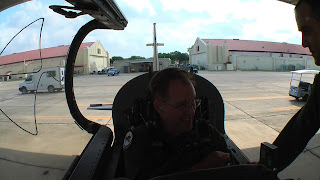 Here’s a shot of the strap-in process just after we turned on the camera. The camera is mounted on one of the vertical structures above the front ejection seat and the horizontal stabilization bar of the canopy just barely clears it coming down. I mounted the camera and Maj Edge turned it on and hit the REC button just before strapping himself in. Here, the LtCol is helping me complete my own strap-in. I’m carrying the audio recorder in my shoulder pocket and I have a condenser tie-clip mic (sans tie clip) dangling behind my ear to capture the intercom and ATC sound. I was pretty worried about the audio because I’d never tried doing it this way before, but it ended up working very well. You need to adjust the audio levels once you’re taxiing to make sure that you have it right, but it worked very well. 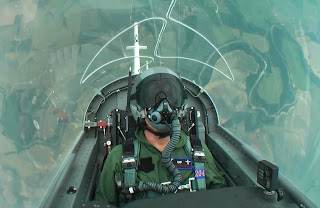 A nice shot of me and the Texas countryside as the aircraft went vertical in a maneuver. It’s a little gray and shadowy, but Will is working on that in post. Want to talk superpowers? Will can change the weather in post and actually use those clouds to his advantage! 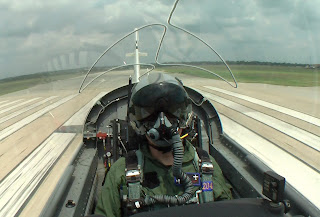 Just before touchdown on Runway 14R at Randolph AFB. It’s hard to see much up front for landing and I’m craning a little to get an idea of Maj Edge’s sight picture.

A lot to chew on over the next few weeks. I need to write the backing music, hit the studio to record it, and get the mix in process. I wrote a lot on the flights on the way home last night from San Antonio and there’s much more yet to write. And then there’s the triage of w3hat I’ve written to get the whole thing down to the core story. I feel a little like Quincy Jones sitting down with a whole bunch of stupendous material and trying to figure out how best to tell the story. My favorite problem!
Posted by Stephen Force (Steve Tupper) at 1:45 PM

Anonymous said...
This comment has been removed by a blog administrator.
2:35 PM

Don't stop posting such stories. I love to read stories like that. BTW add more pics :)