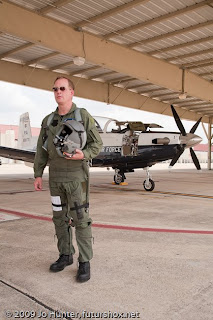 The crazy-talented photographer and fellow aviation enthusiast Jo Hunter of Futurshox was a part of the coverage crew at the recent T-6A Texan II sortie at Randolph AFB and she made her Airspeed debut that night on the episode Firebase Airspeed T-6A Style, along with Will Hawkins of Wilco Films and A Pilot’s Story.

Jo shot stills, assisted with video, and contributed her distinctive Texas drawl (listen to the episode for details) to the proceedings.

Jo has posted several shots from the coverage at her site, www.futurshox.net and in a blog entry at http://futurshox.net/blog/blogger.html. Please be sure to check it out!

The lead shot of this blog entry is one of my favorites. After the flight, will shot some commentary from me for a Scheyden ad next to the aircraft. Glad I got a haircut the day I left for Randolph. I had developed a pretty good rooster tail in the helmet, but a little water and it looked like hair again for the shoot. And there’s nothing like a zoom bag, gee suit, helmet, and oxygen mask to make stuff like that just not matter. 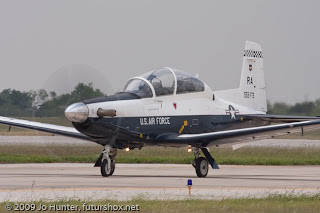 Here’s a shot of the aircraft taxiing in. Maj Jarrett Edge in front and yours truly in back. 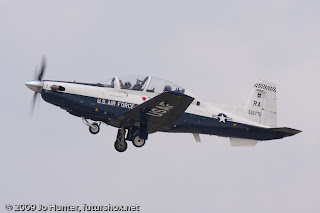 Just after takeoff. You can see the video camera pretty clearly in this one. I remain very indebted to the 559th and AETC generally for the accommodations that they made to allow this coverage. The in-flight video came out very well and we’re all pretty excited about it. I recognize that the jet teams have gee- and systems- based reasons for not flying better-resolution cameras, but I’m not complaining a bit about the Thunderbirds ride, but the video from this flight is orders of magnitude better than any I’ve seen from a jet team flight.

And the T-6A is such a wonderful-looking (to say nothing of performing) aircraft, I think the footage is actually more exciting than the jet team footage I’ve seen.

Will is hard at work editing and I’m going to be providing music and voiceovers to put together the video episode. I’ll also be doing a comprehensive audio episode of the whole thing and I’m hard at work writing and editing for that.

Are there luckier people on the planet? Three days of hanging out with perfectly resonant folks who love what you love for all of the right reasons. Having access to beautiful airplanes that turn mere pilots into the best-trained aviators in the world. Meeting and talking to the people at the top of their games who train the trainers. And now having a little breathing space to take that raw material and use it to tell a story to a loyal and enthusiastic audience.

I can’t thank Will, Jo, the US Air Force, and many others enough. Look for a great couple of episodes (probably a couple in audio and one in video) soon!
Posted by Stephen Force (Steve Tupper) at 8:58 AM