Video from the First Acro Session in the Super Decathlon 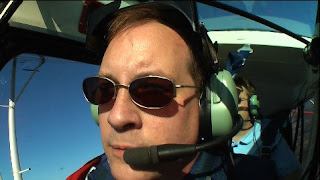 These are the show notes to a video episode. You can watch online right here by clicking on this direct link. http://media.libsyn.com/media/airspeed/AirspeedAcro02.m4v.

These are highlights from my first flight in the American Champion Super Decathlon. I had flown the Citabria with some frequency in 2007 and had a couple of flights in that aircraft in 2009, but this was the first Super-D flight.

By this time (April 16, 2009), I had received word that my T-6A Texan II ride had been approved and I knew that is was going to be sometime in May. So I got out to the airport and flew acro aggressively to condition myself for the Texan ride. I wanted to be able to fully experience that ride and motion sickness can be such a buzzkill, in addition to making the coverage for you guys pretty lame.

So I headed out to Sutton Aviation and set up an acro program with Barry Sutton where I’d train as aggressively as I could and try to build my endurance for the T-6A ride. Toward the end, I was flying twice a week and getting a pretty solid 25-40 minutes of maneuvering each time. But this flight was pretty short. I rag-dolled myself pretty quickly, both because I was just getting my tolerance back after a long winter and because this aircraft is a lot more powerful and maneuverable and I was able to throw myself around the sky a lot more aggressively.

Anyway, here’s the video. For those to prefer, or miss, the audio episodes, I have more in the pipeline. I’m out on the patio this evening writing the script for the seaplane episode. And I go into the studio in a few weeks to record the music for the T-6A episode (provided that I’ve finished writing it by then).

Be sure to catch me at the Indianapolis Air Show next weekend. I’ll be there Thursday through Sunday. I’m doing a presentation for the Civil Air Patrol at Jonathan Byrd’s Cafeteria in Greenwood, Indiana 6:00 – 9:00 and I’m thinking about having an Airspeed meetup/Tweetup at Damon’s in the Holiday Inn Indianapolis East on Friday at 7:00. Watch my Twitter feed for details and to confirm before showing up.

Contact information for Sutton Aviation, where you can fly this airplane with Barry Sutton:

Really enjoy the special video episodes you're providing. Of course all of the episodes are great. I look forward to new episodes as they arrive. Thank you.