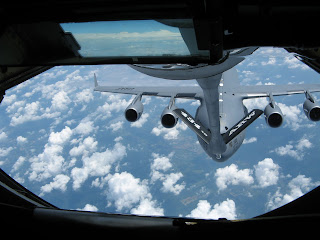 There are many ways to spend a Wednesday. Being in the office handling challenging legal matters for sophisticated clients is one of them. And there are no flies on that particular means of spending a Wednesday. I know. That’s how I spend most Wednesdays.

But then there are those Wednesdays prior to which you get a call and are offered a chance to ride along on a KC-135R Stratotanker with the airmen of the 72nd Air Refueling Squadron/434th Air Refueling Wing of the United States Air Force.

I drove down to Grissom Air Reserve Base Tuesday night and showed up at the appointed rendezvous point with Roger Bishop and Mike Souders of the Indy Transponder. After sitting in on the briefings and watching the passenger briefing videos, we boarded the KC-135R and departed for a refueling mission over the Carolinas. 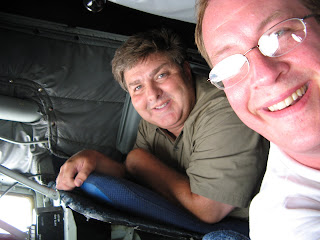 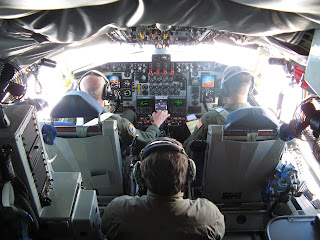 Here’s a shot of the flight deck during the refueling operations. LtCol Thom Pemberton in the left seat and 2Lt Jacob Creel in the right seat. That’s Roger in the middle. I rode in that position for the landing back at Grissom.

Naturally, all of this will find itself into the Airspeed feed. Most likely in both audio and video versions. I have the very best of problems, namely an overabundance of content that I need to get edited and into the feed. It’s my favorite problem to have. Watch the feed and the website for more on this flight!

More information about the KC-135R, the 434th ARW, and the 72nd ARS in the following third-party links.

Posted by Stephen Force (Steve Tupper) at 7:28 AM

laying on your belly passing gas... not a big change for you Steve. :D