Herding Electrons and Preparing for Oshkosh 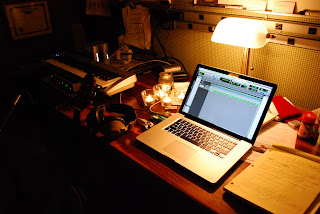 This is a regular blog post. Show notes and links to show audio appear in other posts.

Audio pre-production for EAA Radio is done! Listen for Capt force’s sonorous voice on EAA Radio at 1210 on your AM dial or streaming at www.eaaradio.net.

I spent some time last night working on the initial tracks for Last Pure Thing on the Radio, a new tune that I might or might not release at AirVenture Oshkosk next week. It all depends on how the song comes along this weekend. The song is also a good test bed for learning how to use Pro Tools. I did most of the EAA Radio production using Audacity simply because I’m more familiar with Audacity and needed to bang out the spots to get them to Afterburner Al in time to get them into the rotation.

But Pro Tools is really stinking powerful and I need to spend some time messing with it so I can expand my studio chops. The projects are still going to Scott Cannizzaro for mixing, but it’s really cool to be able to send him something a little more competent. Thus far, I’ve been sending him .wav files recorded analog from my ancient ADAT with an initial clap as a synch signal.

Probably some more studio production through the weekend and then Cole and I leave for OSH in the early morning hours of Wednesday 29 July. I’ll tweet and blog the location of Firebase Airspeed shortly after arrival and try to keep everyone posted about where we’re wandering on the grounds. Definitely going to get out to the seaplane base this year. Can’t believe I’ve blown that off in prior years.

Posted by Stephen Force (Steve Tupper) at 8:50 AM