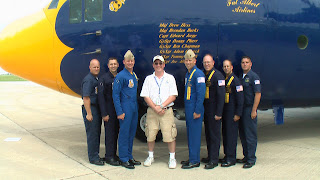 Subscribe to Airspeed using iTunes or your favorite other podcatcher. It’s all free!

These are the show notes to a video episode. You can watch right here or download the video from http://media.libsyn.com/media/airspeed/AirspeedVideoFatAlbert.m4v.

I was fortunate enough to get one of the last Jet-Assisted Take-Off (“JATO”) rides in the Blue Angels’ Marine-flown C-130, Fat Albert. The JATO bottles are getting more and more scarce and it’s unlikely that there will be many more rides like this.

Really interesting ride, mostly because of the lack of outside references. I’m used to unusual attitudes, but it’s a little off to experience them when your only outside reference is an 18” window on the far side of the aircraft.

I mounted the camera just above and behind my head. You can see my WTHR ballcap in the lower right-hand corner of the frame. Query the wisdom of clamping the camera to the airframe of a JATO-boosted C-130. The jitter and vibration is really pronounced in several places. But it stabilized whenever the aircraft got to less than about 0.5G. And those were the best sequences anyway.

I’ve said it before and I’ll say it again. The media hospitality at the Indianapolis Airshow was spectacular. I remain indebted to Roger Bishop for the up-close opportunities as the show.

Posted by Stephen Force (Steve Tupper) at 11:04 AM