On the Ramp with The AeroShell Team 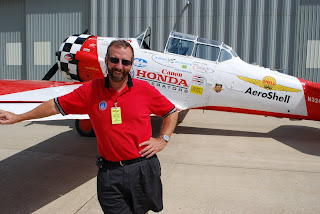 These are the show notes to an audio episode. If you want to listen online, please use the direct link below. http://media.libsyn.com/media/airspeed/AirspeedAeroShellRamp.mp3.

The AeroShell Team has been thrilling airshow audiences for years with a low and precise four-ship T-6 formation aerobatics demonstration. I caught up with the team this summer at the Battle Creek Field of Flight Airshow and Balloon Festival.

If you’ve been following the Airspeed video episodes from this summer, you got to see both a two-ship aerobatic flight and – an Airspeed first – Mark Henley flew the Airspeed HD video camera in AeroShell 2, the right wing, in the Saturday performance at Battle Creek.

As you’ll recall, I went up with Bryan Regan in AeroShell 1 on the Friday before the Battle Creek Airshow this year. Weather had delayed several performers, including the other three AeroShell aircraft. So we launched as a single ship. We were very lucky and right wing Mark Henley, who was inbound to the show site, joined up with us and we got to do some two-ship aerobatics before heading back to the ramp to do these interviews. 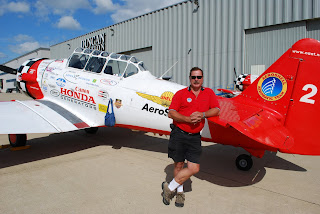 As you probably recall, AeroShell Aerobatic Team Lead Alan Henley was injured in an accident while playing with his children at his home in Birmingham, Alabama just before Oshkosh 2008. A chin-up bar gave way while he was on it, resulting in a fall which caused severe injuries to his neck and a cut to the back of his head. The accident paralyzed him from the chest down.

Alan has been very much on the minds of the airshow community since then and, in addition to the usual questions about formation acro in the T-6, I asked both Bryan and Mark about Alan’s progress.

Let’s go to the interviews. 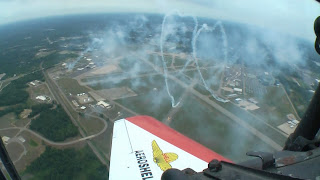 More on the team at http://www.naat.net/.

ICAS has received a number of inquiries recently related to ongoing efforts to support Alan Henley and his family as they continue the hard work related to recovering from the injuries he suffered in July of 2008. The only family-approved vehicle for supporting the family and helping them meet their financial needs is the Alan F. Henley Trust, 2617 Millwood Road, Birmingham, Alabama 35243. That trust is administered by Alan’s brother, Mark, and Ronald K. Stokes, a family friend and Tuscaloosa-area attorney.
In addition, ICAS member and air show performer Doug Jeannes from the Cavanaugh Flight Museum has organized an informal program that has provided assistance to the family in the form of periodic household cleaning services, an effort that is much appreciated by the family.
Any other trust or fundraising effort that you may have heard about is not sanctioned by the family.
If you have questions related to a contribution to the Alan F. Henley Trust or any other issued related to financial support for Alan and his family, please contact Ronald K. Stokes, Stokes Law, 1001 23rd Avenue, P.O. Box 2367, Tuscaloosa, AL 35403, (205) 344-4414, e-mail rstokes@brinyark-lee.com.
_______________________________

I’ve just begun using the suite of apps for the iPhone from ForeFlight, including ForeFlight Mobile, a great app for airport weather, airport information, and flight planning. It’s kind of agonizing because I’m at that point in the year where work really kicks in and I don’t get to fly as much as I’d like to. But I can sit there waiting on a conference call and plan fantasy flights using ForeFlight Mobile. Check it out in the Apple App Store or on the web at http://www.foreflight.com/.
Posted by Stephen Force (Steve Tupper) at 4:26 PM