Frame Grabs from the B-17 Ride at the Indianapolis Airshow 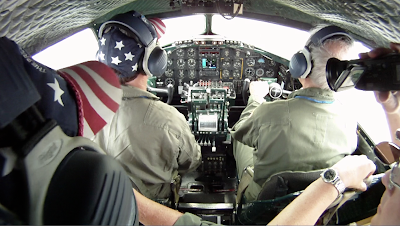 I'm digging through the footage from the Indianapolis Airshow from a couple of weeks ago as I prepare to edit the content down into episodes. And there's some really great footage in there! For the B-17, i mounted a GoPro HD Hero up behind the pilots, as shown above. That's me at the lower right shooting with a handheld. I also mounted a Contour HD in the nose and another Contour HD looking out the left window. I also roamed the aircraft with both a still camera and the Panasonic. 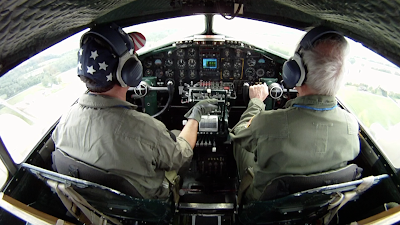 This was the view in the cockpit most of the ride. The crew chief spent a fair amount of time standing behind the pilot and copilot during critical phases of flight, but this was the scene during cruise. 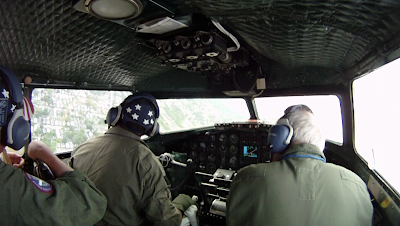 Here's one of the turns during the overflight of the Indianapolis Indians game. All eyes paying attention to the flight path and looking for traffic. (And that included me!)
I have something like an hour of cockpit audio that includes ATC, the calls guiding us in for the fly-over, the coordination with the other aircraft, and the cockpit resource management going on with the crew. I'll be going over the audio during the next couple of days and making notes and getting ready to drop it into both a video episode and an audio episode.
Posted by Stephen Force (Steve Tupper) at 8:52 PM