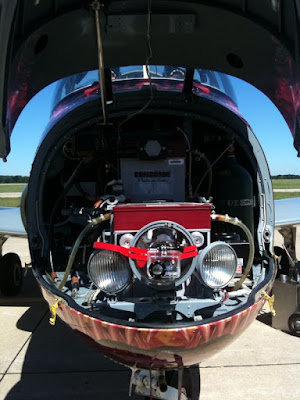 Yesterday was the first performance day at the Battle Creek Field of Flight Airshow and Balloon Festival. I spent the day on the ramp getting planeside interviews with some of the performers for use here on Airspeed and for vignettes for Acro Camp. When the performers withdrew into Duncan Aviation for their briefing, I wandered over to an L-29 Delfin and a BAC Strikemaster that are part of Jerry Conley and Andy Anderson's jet combat act.
After the briefing, one thing let to another and the team offered to put my HD Hero in the nose of the Strikemaster. I used one of the flat adhesive mounts and put it on the landing light just inside the bubble window in the nose of the aircraft. 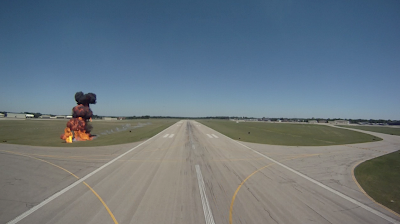 The result was great "gun cam" footage of high-speed passes like this one. They used pyro on the ground as a part of the act and this pass gives you a great view of a few of the pyro charges going off. 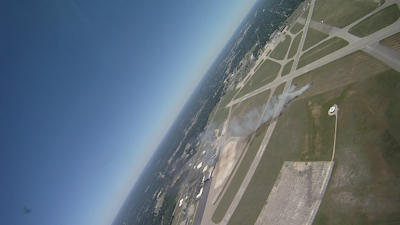 Here, the Strikemaster swoops back on the airport after a few ore of the pyro charges have gone off. 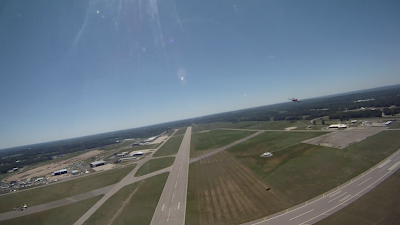 If you look to the right on the horizon line, that's the L-29 headed in the opposite direction. With a closing speed in excess of 900 mph, it just flashes by. I think slow-mo treatment in the video episode will bring this out nicely. 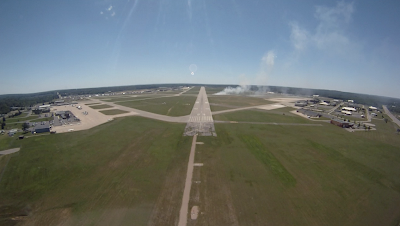 Here's a nice shot of the threshold of Runway 23 (soon to be Runway 23R) on the final approach to land. That's Western Michigan University's flight school on the left, the ANG Base on the right, and the crowd line about halfway down on the left. 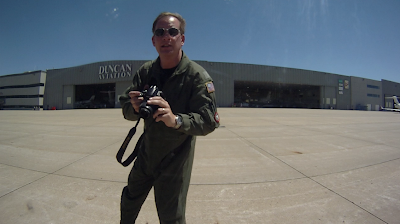 And, of of course, your friendly host shooting a few pictures of the camera installation just before retrieving it from the airplane after landing.
I spent the rest of the day over at the CAP static display handing kids into and of a C-182T. I took my camera along and left it in the tent that CAP shared with the Yankee Air Museum B-25. When I got back at the end of the day from helping to put the airplane away, everyone (including the camera) was gone. It turns out that the B-25 folks grabbed the camera and kept it safe overnight. So the camera is in friendly hands, but a couple of hours' drive away. Thus, no pictures from the still camera in this post. They're going to ship it back to me in time to head to California for an Air Force ride next week. I'll pull the best of the pictures off and get them up here as soon as the camera shows up in the UPS truck.
Posted by Stephen Force (Steve Tupper) at 4:11 PM