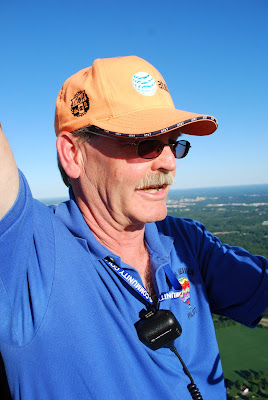 I didn’t expect to get up in a balloon today. Or this year, for that matter (or at least not during this particular year's iteration of the Battle Creek Field of Flight Airshow and Balloon Festival). After all, I had a spectacular experience with Dave Emmert four years ago or so. But, then, again, the show was audio-only at that point and now I travel around with something like five HD video cameras and am getting a little better every day at editing video and making video episodes.

So I showed up this morning bleary-eyed with about two hours of sleep under my belt, intending to say hello at the media center, shoot a few pictures to back an arrival blog post, and then go sleep in the parking lot of a Starbucks for a few hours.

But, through a happy twist of chance, Dale Williams had an open slot for a flight in his balloon, Seventh Heaven (N7252W, a Firefly AX7 with about 76,000 cubic feet of envelope volume). Might I be interested? Do bears dookie in the woods? Heck, yeah! 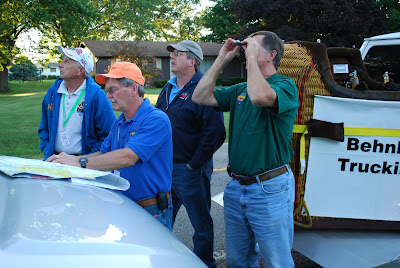 I met Dale and his happy band of balloon chasers just outside the gate and we headed off to Emmett Township, south and east of the airport. This was a three-point target exercise where we’d launch wherever we wanted at least 2,500 meters away from the first target and then try to drop streamers on each of the three targets.

It turns out that Dale and Dave Emmert are friends and, the more I think about it, I seem to recall Dave talking about Dale during the recording of the prior episode. In any case, Dave was there on hand as we tried to figure out where would be best to launch Seventh Heaven. As before, this involves some science, some magic, some consent by landowners, some hemming, some hawing, and some BS. Various groups released small helium balloons (called “pieballs”) to try to obtain a near-realtime guess about the winds. Our group was no different and we released one and then watched it intensely. 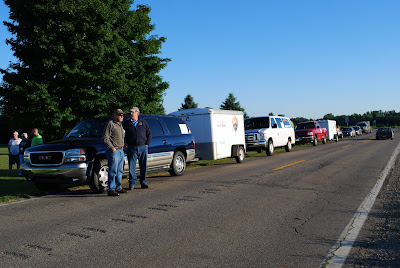 There seemed to be consensus about where the ideal launch point would be, given the winds aloft. Many of the teams ended up along the same stretch of road where we were. 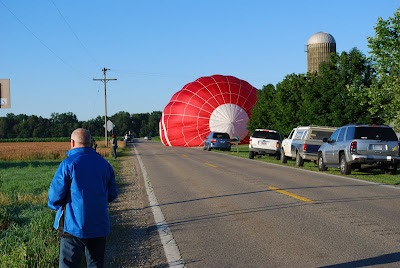 Then came the process of attempting to obtain permission from the landowners to launch from their fields and/or yards. Imagine someone knocking on your door at 0700 on a Friday and a asking permission to grow a 76,000 cubic-foot multicolored bubble on your lawn. We actually knocked on the door of the house in front of which we stopped. No answer.

I’m still surprised at the spaces in which balloon pilots will launch. The yard looked small to me, but these guys were talking about whether they could get two balloons up from the space.

I got a kick out of one team that launched before we did. They set up in someone’s front yard and the balloon actually required a lane of the road to fully inflate. 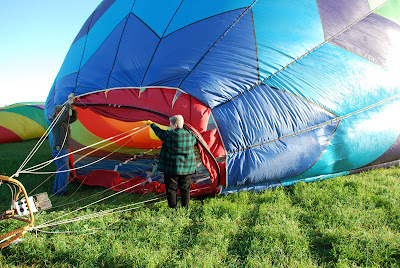 We obtained permission to launch from a recently-mown field and we were in the second wave of balloons to do so. It begins with a gasoline-powered fan to inflate the envelope (the bag that most of us think of as the “balloon”), Then you begin blasting away with a 2 million (yeah, that’s million) BTU burner and the envelope stands up pretty rapidly and is ready to fly.

I climbed in and off we went. 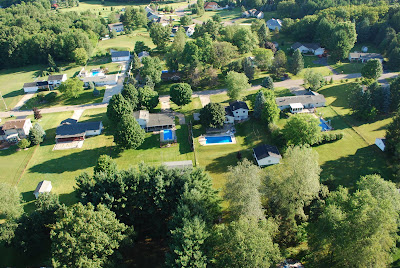 We spent a lot of time around 1,400 feet AGL, which is where the winds that we wanted seemed to be. Balloonists "steer" by changing altitude. As nearly as I can tell, the ideal situation for a balloonist is two wind currents at roughly 90 degrees to one another. You let the higher one push you along and then you descent into the lower transverse one (at the right moment, by the way) to hook around to the target before ascending into the higher one again to set up for the next target.

Dale prefers to be closer to the treetops. I agree with him. It’s really amazing just cruising along less than 100 feet off the canopy of trees. As I alluded earlier, this is going to be primarily a video episode and you’ll definitely get a sense of the drift from the video. Maybe mot Will Hawkins quality, but it should be pretty good.

We essentially missed the first target, but scored on the second. The third proved to be out of reach, so we began looking for a place to land. 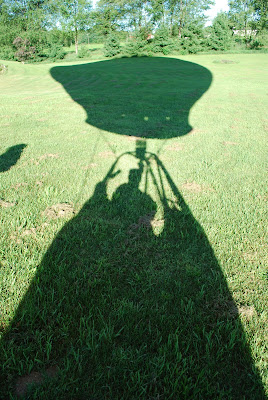 We found it in the form of a residence off to our left. If the places in which balloonists launch surprise me, the places at which they land amaze me. But, then again, I suppose that someone brand new to airplane flight might be surprised that I can put an airplane down reliably on a runway that’s 75 feet wide. It’s all in the experience.

Dale deftly maneuvered the balloon onto the back yard of the residence. We missed the power lines, the ornamental shrubs, and everything else. A couple of bounces and we were on the ground.

You leave the balloon standing up until the crew gets there. There are several reasons for this. First, your footprint is pretty small. Second, your crew can wrangle the balloon to the ground relieving you of most of the worry about dropping the balloon onto something like the ornamental shrubs. (Or the dog. Yes, there was a dog. Or, rather, a horse shaped like a German Shepherd. Named Ozzie.) And, if there are obstructions between where the balloon is and the chase vehicle, you can just lay on the burner until the balloon is neutrally-buoyant and you can have the crew walk the balloon over fences and other stuff to reach a more suitable place to deflate it. 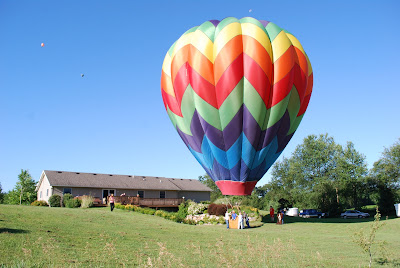 It turns out that we weren’t even the first balloon to set down in this yard. I guess it’s just something that comes with owning a house near Battle Creek. Ballooning is more intensive here than in most other similarly-situated geographies and the balloon festival and airshow brings in competitors and fun fliers from all other the region. Not the worst thing to have come out of the sky every once in awhile.

And, in fact, the people to whom we talked from the balloon (yeah, you can do that) seemed un-fazed by the balloon floating less than 100 feet above their heads. I even had a casual conversation with a lady in her driveway about how she could e-mail me and I’d send her the picture that I had just shot of her and her house. I got her e-mail a couple of hours later and I e-mailed her a couple of pictures in the middle of writing this post.

I have some video editing and production to do, but this ought to make for a good episode. I’m looking forward to putting it out.
Posted by Stephen Force (Steve Tupper) at 7:13 PM

Steve: Nice article on your adventures with Seventh Heaven. The photo of your landing site is great, and Ozzy appreciates the honorable mention! Glad that we were able to provide you with a good place to land at the end of your flight.
Cheers!