On the Eve of the Talon Ride 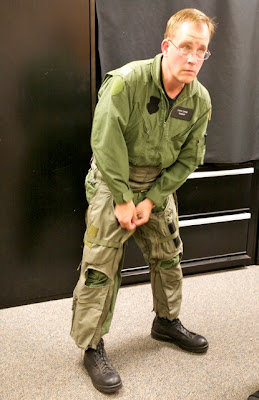 This is a regular blog entry. If you’re looking for show notes or liks to show audio or video, please check out the other entries.

Many thanks to Jo Hunter (www.futurshox.net) for shooting the stills in this entry and to Mark LaCoste for shooting video and providing really valuable Air Force background and commentary from his experiences as an F-15 Eagle maintainer.

Okay, I’m going on radar. (It seems as though I’ve been using that line frequently lately!)

I’ve been here at Beale AFB, about 45 minutes north of Sacramento, since Sunday afternoon. This morning, I completed my flight physical. That’s the last hurdle over which I have any control and thus the event after which I go on radar with you guys. So I can tell you that I’m on the verge of completing the trifecta: Completing demo rides in examples of aircraft from each phase of the fighter-bomber track.

As most of you know, I have logged time in the T-6A and the F-16. That leaves only the Phase 3 aircraft – In this case, the mighty T-38 Talon. I’ve been working with the 9th Reconnaissance Wing for a few months to get things lined up and now it’s scheduled to happen tomorrow. I show at 1345 local and step at 1530 local for an approx. 1.5-hour flight.

Today was mostly preliminaries. I got the flight physical done and then did a base tour. After lunch, it was time for the egress training, parachute training, survival kit orientation, and local survival training. 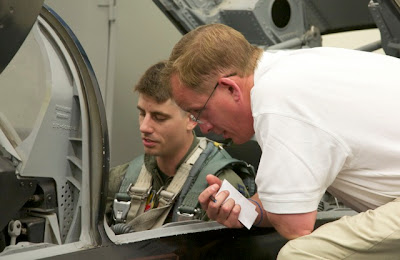 The egress training is always the most interesting of the pre-flight activities. You have a training cockpit and you learn how to get in, strap in, get the canopy closed, and be ready to fly. Then it’s all about emergency procedures. You learn how to egress (get the hell out of the airplane on the ground in case of fire or other danger) and how to eject.

Capt Gorman walked me through the egress training first, and then I climbed in and demonstrated my understanding. It takes doing it two or three times to figure out what you’re doing, but it comes pretty quickly if you’ve paid attention. 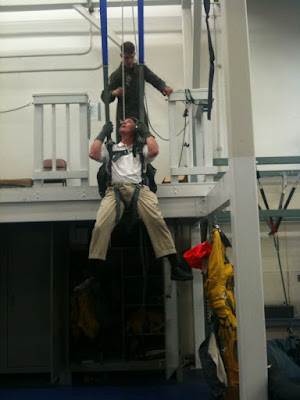 Then it’s all about the parachute. We walked through what to expect in an ejection and how to recognize and troubleshoot parachute malfunctions. Probably the most interesting part came with the personal lowering device (or “PLD”). The idea is that you might make it from 15,000 ft. AGL to 50 AGL just fine, but be hung up in a tree and need to get yourself the rest of the way down unassisted. With the PLD, you can do just that but connecting it to a tree branch or (if your parachute is firmly lodged in the tree) the parachute itself and then pulling the harness releases and lowering yourself with a breaker bar.

I actually got to perform the whole procedure suspended from the ceiling. For the record, it was pretty straightforward and I think I accomplished it with aplomb. One demonstrated parachute landing fall later, I was signed off and the pre-flight training was complete.

Next was life support for the G-suit, helmet, and mask. This is my third time getting fitted for this equipment. Although the fittings have been roughly a year apart, I’m pleased to report that it seems that I remember perfectly well how to don and doff a G-suit. And a helmet and mask. And check out the breathing apparatus at the test station. Not that I’m anywhere close to being a fighter jock. But it gets the heart beating a little quicker when you walk into a place like the base life support room and it turns out that you know what to do. 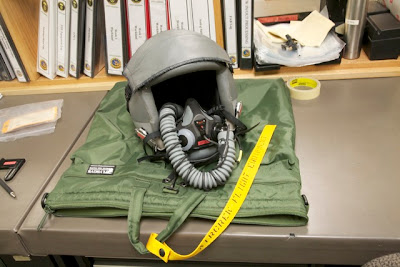 So, in the quiet and dark of yet another locker at yet another Air Force base, there sits another G-suit, helmet, and mask. And they have my name associated with them. Tomorrow I again get to taste a little bit of that fleeting dream that began in 1971 with a book about Joe McConnell, Jr. and the F-86 Sabre. Tomorrow I step to complete the trifecta. And maybe I get a little closer to understanding what lives inside every pilot and aviation enthusiast.

And, most of all, I hope that I again feel that spark that will keep me up at night for the next couple of months composing, editing, writing, and bringing you guys another account from the edge of the envelope.

G’night for now. Sleep if you can. I’m going to go toss and turn for awhile. Wouldn’t you?

Invertor et vomens! Smoke on!
Posted by Stephen Force (Steve Tupper) at 12:28 AM

I hope you do find that spark again. I know you have a lot invested in "AcroCamp", etc - but honestly I have missed "AirSpeed" in the form that I first discovered it several years ago. The podcast, along with video episodes that have come along as time has passed - are things I really look forward to - mostly to live vicariously, but also because of a set of a common interests (CAP, etc).

Thanks for all your efforts.

Just curious, did you hear about the back seater that broke a T-38 in Beale recently pulling into a loop?