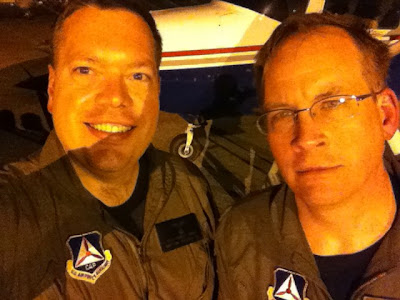 This is a regular blog post. Looking for show notes or links to show audio or video? They're all here. Keep on scrolling.

CAP captain, myTransponder co-founder, and friend Rod Rakic happened to be in town this weekend and we made it a point to try to get up in a CAP aircraft for some proficiency work and aircrew activities.

I've flown in the same aircraft with Rod on several occasions. The first was the Cessna Citation Mustang flight during AirVenture Oshkosh 2009 with me in the left seat and Rod in the back. Then Rod flew me in a C-182T Nav III to Marshall, Missouri and back to get some B-2A weapons system trainer time in our logbooks.

But I had not yet flown Rod under circumstances under which I was in the left seat and was in the right seat. Where he could reach the flight controls and make it a fair fight.

Saturday afternoon, the wind howled like hell. I'm talking 18 knots with gusts over 30. Even with the wind coming pretty close to right down the pipe, that's a log of gust factor, especially considering that I hadn't flown the C-182 since last October or so. And I'm a pretty typical non-primarily-182 driver inasmuch as it's a very nose-heavy airplane that likes to sink quickly and I live in fear of whacking the nosewheel.

I have no problem with the G1000. I just don't like seeing the nosewheel strut come through it.

I arrived early and preflighted the airplane like I was buying it. The wind howled around the hangar. Badly enough that I feared opening the hangar door and badly enough that I had a hard time being understood on the phone by my flight release officer because of the noise of all that sheet metal that wanted to depart the tee hangar.

But around 6:30, it magically calmed down to a steady 18 knots right down the runway. Rod arrived, I got my flight release, we stomped the ramp (a very abbreviated ritual along the lines of the Haka - you had to be there) and we launched about an hour before sunset.

We flew up to Yale, Michigan located my high school buddy's place, descended to about 1,600 MSL, and did a mock photo mission over it. Flying at 90 KIAS in a 45-degree bank that low would have bothered me a lot just a year ago. But, after NESA MAS and flying as much tailwheel and acro as I have, it seemed really natural. And the C-182 is a really stable platform for those kinds of maneuvers. You can almost roll in and fly the maneuver on trim alone.

Takeoffs, as they say, are optional. Landings, as they also say, are mandatory. Aviation, unlike maritime pursuits, has a perfect safety record. We've never left one up there.

We went to St. Clair County Airport (KPHN), whose Runway 28 was within 20 degrees of a 15-knot steady wind. Rod had spent a lot of time there in his youth as a line guy and student pilot, so it was a bit of a trip down memory lane for him. I was reluctant to face my C-182 demons more than 40 nm from the airplane's home base in case I yard-saled it across the TDZ. And I began by mistaking Runway 22 for Runway 28.

But I got her headed in the right direction (without entering Canadian airspace in the process) and turned a very nonstandard entry into a very stabilized approach. 70 over the numbers, then kissed it down. I taxied back and got another trip around the patch, this time getting it a little flat, but serviceable and most of the parts stayed in formation with the rest of the airframe.

Rod is getting ready to become a CFI. And the CFI manner is beginning to creep into his right-seat personality. I pointed out a couple of the things that he said or did and made that comment. He was a little taken aback, but admitted it. I assured him that there were no violations of Wheaton's Law involved. In fact, it's very cool to see one's friends constantly evolving and challenging themselves.

Additionally, Rod is going to be a great instructor. He's already a very precise and disciplined pilot. But he also has an excellent way of inspiring confidence and channeling knowledge without being imperious about it. As someone who has watched new student pilot starts fall off and student pilot completions plummet, it would be important to me that Rod become a CFi regardless of whether he was one of my bros. But having him as one of my bros as well? Bonus!

To be sure, Rod gave no "instruction" per se in the aircraft. He's not a CFI. And, even if he were, he's not authorized by CAP to give instruction in CAP birds. (Yet.) We even briefed our roles standing at the nose of the aircraft before leaving. As PIC, I told him that input was welcome. And expected. But I was PIC and any yard sale that I laid out on a runway was mine and mine alone. A good way to brief almost any flight, in fact.

We departed St. Clair and pointed the airplane at Ray Community Airport (57D). I have some plans for things this summer at Ray and I wanted to show the airport to Rod. Ray is the prettiest airport to which I have ever personally been. And Runway at Ray 9/27 is just under 2,500 feet, which I had just proved was a distance within which I could get a C-182T down and stopped. But it was a little dark to actually see anything there and I was reluctant to put my C-182 skills to the test on a shorter runway in the dark.

So back to Pontiac. We got the straight-in approach to Runway 27R. No excuses. I had the airspeed and configuration dialed in from five miles out. the only issue was that it was dark. I mean "duckin' fark." It was less than an hour after sunset, but not a lot less.

Last notch of flaps at a half mile. Yeah, a half mile is further than I could glide with the barn doors hanging out, but a stable approach coming over the fence was more important in this case with this pilot in this airplane than the much-lesser chance of being screwed by an engine failure on short final.

Airspeed 75 KIAS over the fence. 70 KIAS over the numbers. I had my attention way over the nose and off to the side. Rod was looking directly out the side at the ground.

It was a little earlier than I expected to flare. But I had five more knots of airspeed than I really needed and lots of power available. And Rod has lots of experience in the C-182. All of the input funneled through that high-speed pachinko machine that I've built in my head. I made the decision as PIC to accept the suggestion from my PNF and flare.

I flared. A moment or two of feeling the sink and beginning to think about pushing in the power. Then "doink." Mains down. Yoke in my chest. Nosewheel down. Nice! Let her roll to Kilo and then taxi to Royal for gas.

I think that the landing would have come out safe either way. My way might have been flatter, but would likely have been okay. In any case, it's good to have two sets of eyes and two brains focused on the issue. And it's one of the most special things in all of aviation to have a PNF next to you that you know well and whose thoughts will accelerate through your pachinko machine and get quickly to the place where you make the right decisions.


We hit the Pontiac pilot watering hole (the Shark Club) for beers and dinner after. I think it bothered Rod slightly that I had noticed CFI noises coming out of him on the flight and he was concered that it had been bothersome and launched into a discussion that was part apology.

Laughter, beer, food, and pilot talk, then the departure - me for home and and he for his family in Clawson. I a slightly better pilot. He with a little more time in the right seat trying out the view from there and really thinking about what it's going to be like when he adds the rating and starts flying with people who need his counsel more than I do.

All epic. In a smaller way than Dick-Collins-ing through the yellow IMC over Chicagoland at 2:00 a.m. But in an important way nevertheless.

Awesome post, Steve. I am certainly envious that you had such a cool opportunity to fly with Rod.

You guys are both awesome. I would have been honored to have been a passenger!

...but please tell me you're not still wearing that command patch, which was phased out three years ago (last allowable wear date was March 2008).

If you're going to wear the flight suit, please wear the right patch.