Making Good on a Deal 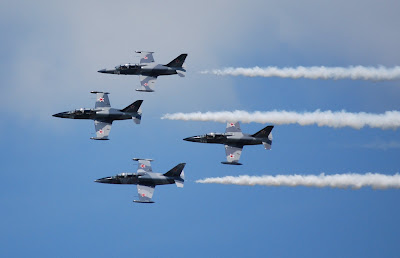 This is a regular blog post. Looking for show notes or links to show audio or video? Keep scolling or check ou the archives in the sidebar. It’s all here!

On Sunday, I went to the Battle Creek Field of Flight Airshow and Balloon Festival in the more traditional sense. I spent Friday and Saturday at Hangar 1 on the field, embedded with The Hoppers, a civilian L-39 jet team, setting up cameras, offloading video, and riding on a couple of hops in the back seat. Sunday was about hanging out with the crowd and touching base with that element of the airshow experience. 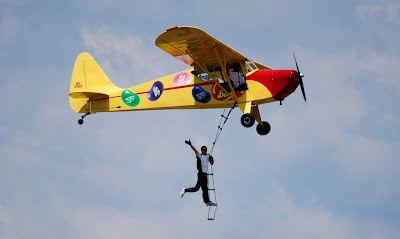 I got to see Kent Pietsch fly his Interstate Cadet from the other end of the show line. It’s closer to the staging areas for the show aircraft and it’s a different view. Kent has long captured my imagination in much the same way that Greg Koontz or John Mohr have. In the “It’s not how fast, it’s how slow” vein of classic barnstorming. Hammerheads peaking at 200 AGL. Doing a steep turn at treetop level around the TACAN station. Picking up Tom Green from the top of a camper. Really wonderful control with light wing loading and low horsepower. 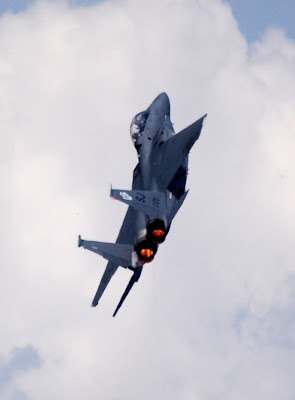 Then the F-15E Strike Eagle Demo. Cash and BUDA wringing out the jet in one of the best-orchestrated and executed single ship demos I think I’ve ever seen. This was the second show at which I’ve seen them fly and second, third, and fourth time I’ve seen the 2011 demo. It just gets better every time.

About the time the Eagle landed, my iPhone buzzed. It was a text message from Don Weaver saying that Don had the Berz Flight Training Pitts at Pontiac. Don and some others were practicing for next weekend’s IAC Michigan Aerobatic Open and, if I could get there, there was a slot for me to fly.

I had enough content from the Battle Creek show. And I had even handed off in-cockpit video of the Hopper flights to the local TV station. Mission, for all practical purposes, accomplished.

I packed up, headed through the trampled grass, said goodbye to the Battle Creek media chair, and pulled out of the parking area.

The world has more than its share of aviation enthusiasts. I know. I’m one of them. And I’m as competent an enthusiast as you’ll ever meet. Climbing in, on, and around jets with hot seats. Setting cameras, knowing the angles. Troubleshooting technical issues. Being a very-low-maintenance rider who needs only the safety brief and is never a distraction in the back seat. Being a guy who has a better than average chance of being able to land the jet if the front-seater ever took a nap.

But, at the end of the day, I’m something of a poser. I post gorgeous shots of myself looking stern and competent in the back of the jet. I look good. But the fact of the matter is that my hands are in my lap or holding one or more cameras. I purposely crop the shots so almost every shot leaves the shot ambiguous as to whether I might be flying the jet.

I don’t have a problem with that. And I’ll keep doing it. No shame there. But, driving home in the car all alone with myself, it’s hard not to think about the disconnect between the guy in the pictures and who I actually am and what I actually do. It’s not guilt, exactly. But there’s a sense that I spend this time basking in the glow of others and then hope that some of that residual glow makes it into the podcast or the blog.

But this year is a little different. This is the year that I put my skills where my mouth is. On Thursday, I go to Jackson (KJXN). I’m not going to be there looking for a ride with another pilot. I’m going to Jackson to fly.

The IAC Michigan Aerobatic Open is slated for Saturday and Sunday. And there will be practice times on Thursday and Friday. One of the entrants is flying the Primary sequence in a Pitts S-2B. That guy is me.

The Primary is not complicated. You can fly it in a minute or so. 45-degree upline to level, one-turn spin, half-Cuban, loop, 180-degree aerobatic turn, and slow roll. It is by no means anything that would impress even the average airshow crowd. But I will fly it. In a box. With people watching. Some of whom will be judges. 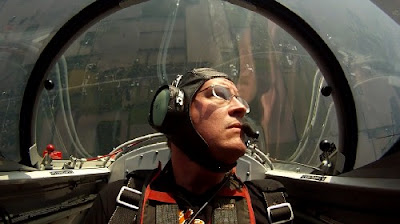 Don and I launched in the Pitts at about 7:30. The sun was low in the sky. We turned west toward Ray Community Airport, where we’d be dropping off the aircraft after the flight. About two thirds of the way there, I cleared the area, then flew the sequence. Good spin! Stopped right where it was supposed to. Even better Cuban. The loop needed work. The aerobatic turn was pure joy, performed (as I like them) with more G than is strictly necessary. The slow roll was a train wreck (as usual). I went over the maneuvers that needed work until I was reasonably satisfied with that session. Then we proceeded to Ray and got some dinner with Rod Rakic before flying back to Pontiac in Don’s Archer.

I’ll probably have at least two more practice sessions before I fly for the judges. I’ll be ready. For now, it was a good flight and a great evening. And a step along a path that I’m only just beginning to tread.

I’m flying in the competition for a number of reasons. I’m flying for the challenge against objective measures that has drawn me to ratings and endorsements. I’m flying because it’s a perfect next step in my evolution as a pilot.

Because it is time to take the controls with my hands and feet and do this above a field surrounded by upturned faces.

This weekend, I go find out.

It’s just the IAC primary. No one that I admire in the airshow community will be especially impressed that I flew the Primary, even if I fly it well.

But the guy who drives back from airshows all alone in the car will want to know about it. He’ll care. And he’ll look me in the eye and know that I took up this challenge, even when I could have avoided it for any of hundreds of reasons.

That’s because I made a deal with him. If I firewall the throttle, rotate, climb, fly my ass off, and leave everything I have up there in the box, he’ll no longer have reason to think that it’s all a veneer. He’ll know that I reached up into the wind for the real thing and either caught it or tried as well as I’m capable.

There are worse deals one could make.

But on Sunday, I expect to be, if only in the most basic sense, a competition aerobatic pilot. And no longer a poser.

See you this weekend. I have a deal to make good on.