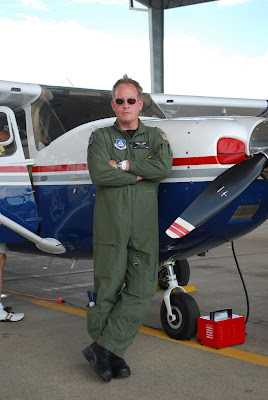 I got to put on my Nomex and hit the Selfridge ANGB Airshow all day on Sunday to help run the CAP static display. I hit the gate at around 0540 and was out on the flight line by about 0730. We put about 130 Boy Scouts through the hands-on portion of their aviation merit badges in addition to putting several hundred other people in one of the wing’s glass C-182Ts. 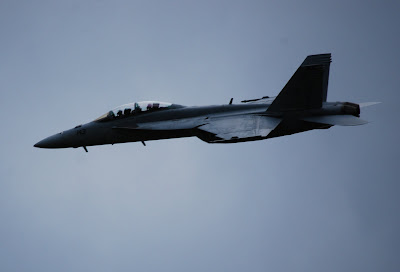 Temperatures never got much past 80 and there was a good breeze. Good weather for being in Nomex all day. Not so much for photography. I headed out to the show line to shoot the Rhino demo and the heritage flight, but gray airplanes against a dark gray sky don’t work that well. Still, the F/A-18F is a beautiful airframe and it makes great noise.

For those who have asked, I was on the base when Todd Green fell. I was down near Base Ops the CAP display. I probably saw the pass on which Todd fell, but show center, where the fall occurred, was obscured by the roof of the structure under which I was standing. I found out about the fall about 15 minutes later from a friend who was returning from seeing Brett Hunter fly. My thoughts are with Todd’s family and friends. I met Todd briefly at the ICAS convention in Vegas in December.

I also briefly met Bryan Jensen at the same convention. Bryan died on Saturday at the Kansas City Aviation Expo Airshow when he failed to recover his Pitts Model 12 from a maneuver.

It’s been a rough weekend for the airshow community. We lost Todd and Bryan, as well as Flight Lieutenant Jon Egging at the Bournemouth Air Festival in Dorset, England. That makes four fatals this year.

Aerobatics and airshow performance are risky. The performers understand the risks better than anyone else. Safety in operations is a passion for these people. They manage risk in every way they can. I know. I’ve spent time in the box and on the flight line with performers, especially this season. I also attended Airshows 101 at ICAS in December and had other opportunities to see and hear safety discussed in a frank and open way.

Even random data is necessarily clumpy. I’m hoping that the mainstream media realizes that there were no airshow fatalities in 2009 or 2010 and there was only one in 2008. And there hasn’t been a spectator fatality in North America since 1952.

Any accident or incident is one too many. Perfect is the goal. Nobody understands this better than those who participate in the airshow industry. And, as a guy who has flown with airshow performers in an Extra, several Pitts, an F-16D, and two L-39s, I’ve seen the safety culture and commitment firsthand.

What’ll happen going forward? The same thing that happens in with every airshow accident or incident. Performers and others in the industry will scour the circumstances for details and then will debrief it thoroughly, openly, and with brutal honesty.

I remember the debrief scenes from Blue Angels: A Year in the Life. Each pilot ended each critique session, no matter how good or brutal, by saying, “I’ll fix my safeties and I’m glad to be here.” It’s not just rhetoric. And that attitude is not confined to the Blues. It pervades this very special industry.

The crew for the Acro Camp 2 movie shoot begins arriving later today. Jack Hodgson, the writer, arrives this afternoon. Will, Tori, Shawn, David, and Ruby arrive in the wee hours of tomorrow morning. And the campers arrive Thursday with ground school beginning at 1700. I’ve been up since 0300. I can’t sleep. There’s unbelievable energy surrounding this shoot and it’s not hard to get caught up in it, even when I should be stockpiling sleep.

Watch this space and www.acrocamp.com for more information!

Posted by Stephen Force (Steve Tupper) at 5:21 AM