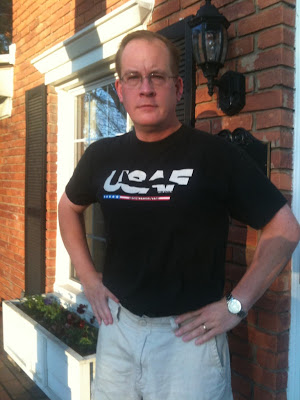 A number of new/social media personalities are celebrating Veterans' Day by wearing our WindTees shirts featuring the aircraft and twitter handle of Daren Sorenson, a USAF Lt Col, F-15E Strike Eagle pilot, and Deputy Operations Group Commander at Nellis AFB. Lt Col Sorenson recently received news that he will be awarded (at least his second) Distinguished Flying Cross for actions during his most ...recent deployment to Afghanistan.

I'm fortunate to know Lt Col Sorenson and his brother, Mark Sorenson, a talented airline and airshow pilot. I'm also fortunate to be the nephew of Dennis Reed, a Viet Nam -era air cavalry pilot and later corporate pilot for Kellogg. And I'm fortunate to know dozens of others who are serving now, have served, will serve, and/or are members of families of the foregoing.

I serve as a search-and-rescue pilot and legal officer in the Civil Air Patrol (USAF Auxiliary). I perform a valuable service to my community and country but let's face it: I've never been shot at and it's unlikely that I'll ever face the risk of anything worse than an engine failure.

As a CAP officer, I am frequently in uniform in public and it is not uncommon for people to come up and thank me. I've even gone to pay the check after breakfast, only to find that someone else in the restaurant has already anonymously paid my bill, no doubt because of the uniform. I'm happy to accept thanks for what I do, but I know that the majority of the respect I'm shown is because I'm mistaken for active duty military. The average civilian (and many military personnel) can't tell the difference. So I try to wear the CAP uniform properly and proudly and be worthy of it.

I used to try to explain to little kids at airshows that I'm not an active-duty shooter. (Really, I'm not even a toner.) It just confused the kids when I tried to do that. So now I simply receive the thanks with a big smile and save it up for today. Today, I pass on the greatest portion of the respect that I've received over the last year to those who have done the greater part of earning it.

So, Lt Col Sorenson, Uncle Denny, and others, I hereby pass along this year's installment: Five kids at Selfridge, a guy at Flint, the barista at Starbucks at Woodward and Square Lake, my daughter's kindergarten class, and the guy or gal from the restaurant. I pass along the thanks of these people and I add my own in heaping measure.

And I owe somebody breakfast.

A proud and reflective Veterans' Day to all.
Posted by Stephen Force (Steve Tupper) at 10:29 AM