I hit the Battle Creek Balloon Championships and Field of Flight Airshow on Friday. See www.bcballoons.com for background. 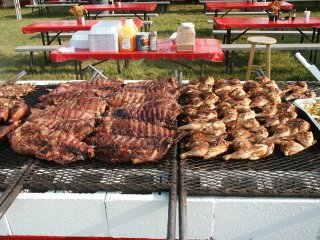 Wandered the field a little andscoped out the concessions. Good-looking barbecue for starters. Turkey legs, ribs, chicken - you name it. And the usual assortment of elephant ears, lemonade, sausage, and other stuff.

And the Budweiser Clydesdales. They were blaring the theme music the whole time. I've still got that damned music in my head.

Here comes the king, here comes the big number one . . . I can only imagine how annoying that would have to be if you toured with the Clydes. Maybe you become impervisous to it after awhile. Beautiful horses, though. And well-trained. 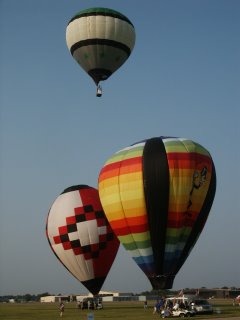 I saw my first balloon launch. Rotten photo opportunity because it was impossible to get up-sun of the balloons. So they were either harshly side-lit or blacked out against a too-bright sky.

Plus, it was hazy. Actually a good thing, that haze. It means that there's not a lot of lifting action and that the atmosphere is pretty stable. If it were more clear, it would mean that the atmosphere was churning around enough to more the particulate matter around.

But on to the good stuff.

This is a powered pilot's commentary. I can't help but wonder about a flying apparatus where you can take your hands off of the controls for 20 minutes at a time without dying. It's probably very cool in that you have to land the thing without as much control of where you're going to land it. That takes some talent. I also understand that the balloonists had banners that they were supposed to drop on Xs marked in town near schools. I would imagine that then jockeyed around for altitude trying to find layers of wind that would take them over the places where they wanted to be. I also understand that the football-shaped balloons are easier to control, although I have no idea how one would control direction even with the oblong shape.

Maybe it's the proximity. Airplanes move faster and are harder to see so we keep ourselves separated (or ATC separates us). Heck, a few of the balloone collided. The commentator (now being very informtive) explained that this is "kissing." And it's no big deal. I saw a guy drag his gondola right up the side of another balloon. Apparently, it's no great shakes.

You don't want to ascend into someone so you collide with the top of your ballon. Apparently, they have velcro-attached top panels designed for quick release upon landing and you could inadvertently rip that open while aloft. It's apparently not 100% fatal because one of the pilots that went up on Fruday had had that happen. But heaving for the planet with a rapidly emptying and floppy envelope above you has got to suck.

Anyway, I'll try to interview one or two of the balloon pilots and might do a podcast on it.

I'm heading back tomorrow and will be there July 2-3. The Thunderbirds arrive tomorrow and many of the other performers should be there as well.

I'm doing some more homework tonight so I can be ready. I get the sense that I may have a big group of folks around and that I may not have enough time to corner everbody serratim. So I'll see if anybody's going to object if I hang around on the ramp looking for interviews. Should be fun regardless.
Posted by Stephen Force (Steve Tupper) at 10:36 PM

I loved going to airshows as well as a kid. I grew up in Michigan and we would travel around the state during the summer and make a point to hit at least one airshow.

Not to lighten the mood, but I found some airshow footage of a Thunderbird accident where the pilot ejected just before crashing. The footage is in to perspectives, from the ground and a cockpit cam on the pilot. It's quite amazing!