Snowbirds: The CT-114 and No.3 Pilot Maj. Cory Blakely 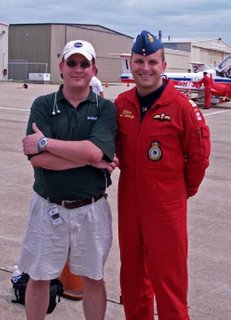 You may remember that check-in from our coverage of the Canadian Forces Snowbirds on an episode earlier this year as part of our survey of the premier jet demonstration teams so that you’d be prepared as airshow season started later in the year. Lest anyone think that we at Airspeed are all talk, we braved menacing cloud cover and horrible road coffee to go and stalk the Snowbirds in their native setting – The airshow.

In this show, we’re going to do two things. First off, I don’t think that many people understand how special the Snowbirds’ aircraft are, so we’re going to go a little more in depth on the CT-114 Tutor. Second, and by no means less important, we’re going to actually talk to Maj. Cory Blakely, who flies the No. 3 aircraft in the inner left wing position.

So let’s get going. The Snowbirds are the Canadian Forces 431 Air Demonstration Squadron, based in Moosejaw, Saskatchewan, Canada. They train primarily in Saskatchewan and do their pre-season training over different terrain in British Columbia, then thrill audiences all over North America over the course of one of the longest demonstration seasons undertaken by any jet team.

The Snowbirds fly the Canadair CT-114 Tudor and have done so since 1971. A predecessor team, the Golden Centennaries, flew the Tudor beginning in 1967. Canadian-designed and built and claiming a heritage that goes back to preliminary design in 1955, the Tutor was the primary Canadian Forces military jet trainer up until 2000. 22 Tutors continue to fly for the Canadian government and they’re divided between the Snowbirds and the Aerospace Engineering Test Establishment.

The Tutor weighs in at about 7,150 pounds and its J-85 engine produces about 2,700 pounds of thrust. It’ll do more than 400 knots, even with the smoke tanks attached. It’s 32 feet nose to tail, about 36 feet from wingtip to wingtip, and about nine feet tall at the tail. It’s pressurized and air-conditioned and has a service ceiling of 38,000 feet.

The Snowbirds’ Tutors were among 50 that received updates under a Depot Level Inspection and Repair (DLIR) program and an Avionic Update program that rewired the aircraft and installed a DC starting system, among other things Those updates were to extend the rated life of the aircraft to 2015, but the Canadian Airworthiness Review Board never formally ruled on the program.

In addition to routine maintenance, the aircraft require a consolidated inspection package every 400 hours and the engines are rated for 1,600 hours TBO. As of the Tutor’s retirement by the Canadian Forces in 2000, the fleet aircraft had averaged almost 8,000 hours with a low of about 5,400 hours and a high of 12,300 hours.

It seats two side-by-side. I don’t know what training is like in tandem aircraft, but I can’t help but believe that the side-by-side configuration is much better for training. . . . Although it does make it easier for the instructor to whack you in the head if you line it up on the hangars on an ILS. But it’s primarily radio and new media hosts that do that, right? In any case, it’s a nice-looking cockpit.

The No. 1 jet, and possibly others, have convex rear-view mirrors across the top of the cockpit frame. I had often wondered whether the boss gets lonely not being able to see the other aircraft in the formation, but it’s got to be pretty cool to see up to eight other aircraft in your upper peripheral vision. That’s a lot of red in the rearview and it all hangs on with beautiful precision.

The Tudor is a great training aircraft. It’s very stable and very maneuverable, which gives students the opportunity to experience a broad envelope of flight characteristics. Unlike many other jets, the Tutor actually glides pretty well. Those who have flown it say that it “scales” well, which is to say that it models very well at its size the performance and handling characteristics of the larger and more powerful military aircraft to which Canadian military pilots transitioned from the Tutor.

There are apparently many other Tutors in civilian hands and a little searching on the net will bring up several forums for discussions by those rebuilding them. It’s really worth the time to read a couple of those boards. The posters are amazingly knowledgeable and are really passionate about their restorations and about flying the aircraft. There’s one registered in the US on Mercer Island in Washington State under an experimental type certificate. I checked the registration database of Transport Canada to try to determine how many were registered in Canada, but found none. It may be that civilian-owned Tutors in Canada either don’t have to be registered in that database or are registered under some designation other than C-114.

So on to the interview. We caught up with the Snowbirds at the Battle Creek International Balloon Festival and Field of Flight Air Show in July on the day they arrived. It took only a few minutes with public affairs officer Navy Lieutenant Petra Smith before we met Maj. Cory Blakely.

The major is 38 and flies the No. 3 jet in the formation. That’s the inner left wing of the formation. The No. 3 pilot flies to the left of, and a little behind, the lead jet in many of the team’s formations. As such, much of the left half of the formation lines up on his aircraft and depends on his consistency and skill for its integrity and safety.

He’s in his third year with the squadron. Prior to joining the Snowbirds, he was stationed at “The Big 2,” the 2 Canadian Forces Flying School in Moose Jaw, Saskatchewan, instructing in the CT-156 Harvard II, a turboprop trainer that offers an initial climb rate in excess of 3,300 feet per minute and handles sustained 2G turns at 25,000 feet. The Big 2 trains more than 150 pilots every year through the NATO Flying Training in Canada program. The Big 2 is also home to the Flying Instruction and Standards Section, the unit responsible for training military flying instructors.

Prior to that, he served with the RCAF 434 Squadron in Stan Rogers country – Greenwood, Nova Scotia. The 434 squadron, nicknamed the Bluenose after the schooner by that name that you can see on the back of Canadian dimes, has been formed and disbanded several times between its initial formation during World War II and the present day. It was most recently disbanded with the retirement of the CT-133 Silver Star (which Maj. Cory flew) and CE/CP-144 Challengers. I mention this bit of history because, in spite of meticulous research, I managed to miss the retirement of the Silver Star, but mentioned it in the interview.