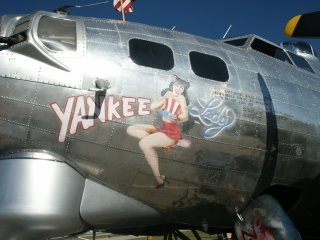 Parked just down the flight line from the CAP communications trailer was the Boeing B-17G Flying Fortress “Yankee Lady” from the Yankee air Museum at Willow Run Airport in Ypsilanti, Michigan, about 25 miles away as the bomber flies.

The Boeing B-17G is 74 feet long, has a wingspan of 104 feet, and stands 19 feet tall at the tail. It weighs about 36,000 pounds empty and has a max gross takeoff weight of nearly 66,000 pounds, leaving a lot of room for crew, fuel, and munitions. The crew included two pilots, a bombardier, a radio operator, and five gunners: One in the nose, two at the waist, one in the ball turret, and one in the tail. The aircraft carried 11 to 13 machine guns and up to 9,600 pounds of bombs.

Boeing built a total of 6,981 B-17s in various models, and Douglas and Lockheed collaborated to built another 5,745.

Yankee Lady is a beautiful aircraft. She’s polished silver and makes beautiful noise when she has all four bird shredders turning. She’s a tail dragger, which makes her look like a fighter from a distance. But when you get up close, you see how massive its wings and other superstructure are. The leading edges of the wings are amazingly thick and the wings are really broad. It’s a muscular-looking aircraft.

Yankee Lady is a movie star, too. She was used in the movie Tora! Tora! Tora!

On a break in the action, I had a chance to talk to Paul Scholl, who flew Yankee Lady in for the show. 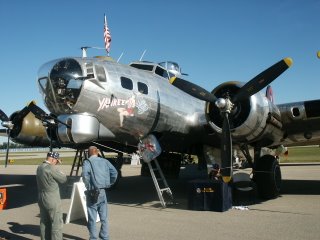 You heard us mention the fire. On October 9, 2004, the hangar that housed the museum caught fire and burned to the ground. All of the flyable aircraft made it out but the museum did lose virtually all of the tooling, equipment, and spare parts for all of the aircraft plus all of the office and display fixtures.

You can visit the Yankee Air Museum’s web page at http://www.yankeeairmuseum.org/ and find out about visiting the museum and donating to help fund recovery after the fire.

To see a list of needs and to find out how to donate to the museum, visit http://yankeeairmuseum.org/donations.shtml.

You can also donate directly to the Yankee Air Museum's recovery fund at https://www.paypal.com/cgi-bin/webscr.

Posted by Stephen Force (Steve Tupper) at 11:48 AM