C-5A Galaxy and a Talk with TSgt Brandon Ives 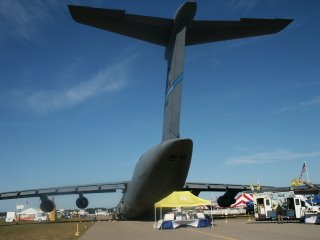 We’re going large this time on Airspeed. Large as in the Lockheed C-5 Galaxy, the largest aircraft currently in use by the Air Force’s Air Mobility Command.

The C-5 is powered by four TF39 turbofan engines that produce 43,000 pounds thrust each. The air intake diameter of each engine is more than 8.5 feet. Each engine pod is nearly 27 feet long.

The landing gear consist of a total of 28 wheels and the landing gear will “kneel” to adjust the cargo deck to allow loading and unloading at various heights off of the ground.

You just don’t get a sense of the size of the C5 until you walk up to it. For starters, you can see it as you drive up to the airport. Then you get out of the car and walk toward it and you get the sense that you’re not getting any closer to it. By the time you get close enough to really get a sense of its size, it fills your entire field of view. So much so that it’s hard to get a picture of the aircraft that conveys a sense of its size. Too close, and you’re just shooting pictures of parts of the aircraft. So you walk a few hundred feet away, but by then the objects to which to compare the C-5A are too small to be good comparisons.

I got up close and personal with a C-5A this summer at the Muskegon Air Fair in Muskegon, Michigan. Toward the end of the day, they actually set up a band and all of its equipment in the back of the cargo compartment and had room to spare.

Anyway, it’s a technically complex and interesting aircraft and we talked to USAF TSgt Brandon Ives about it. Sgt. Ives is a crew chief with the 439th AMXS – 439th Air Wing – Westover Air Reserve Base in Massachusetts.

Thank you TSgt Brandon Ives and thanks also to the 439th Air Wing in Westover Air Reserve Base in Massachusetts. We really enjoyed having your C-5A in Michigan for the weekend and we hope that you’ll send it back again next year!

Hear the audio at http://airspeed.libsyn.com