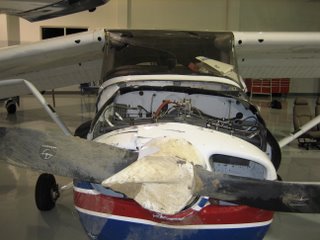 Nearly everybody says goodbye to an old friend at one time or another and pilots are no different. But it's particularly tough when a pilot has to say goodbye to an airplane.
You may have heard me on this program shooting instrument approaches or doing parts of the show from Cessna 918TA, known locally at Oakland County International Airport in southeast Michigan as Tradewinds 18. Well, today I bid a fond farewell to 18. She met her end in the grass next to runway 27R after a bad landing on July 13.

On July 13, 2006, at 1106 eastern daylight time, a Cessna 172R, N918TA, operated by Tradewinds Aviation Inc. as an instructional airplane, impacted terrain during landing on runway 27R (5,000 feet by 100 feet, asphalt/porous friction courses) at Oakland County International Airport (PTK), Waterford, Michigan. Visual meteorological conditions prevailed at the time of the accident. The 14 CFR Part 91 student solo instructional flight was not operating on a flight plan. The student pilot was uninjured. The local flight originated from PTK about 1030.The student pilot stated that he arrived at Tradewinds Aviation Inc. for flight training at 0830.

I saw 18 in the hangar. Prop bent and scored. Right wing twisted. Firewall caved in.

There's a picture of 18 in the show notes at http://www.airspeedonline.blogspot.com. A fellow Civil Air Patrol officer who also flies at my school snapped the picture a little while before I saw her. I know that it was before I saw her because, in the picture, there are no lip marks in the dirt on the spinner. That's right. I planted a big wet one right on her nose, Michigan clay soil, grass stains, and all.

A man doesn't kiss his airplane has issues showing emotion and needs to spend more time on the ramp.

18 was one of a few aircraft that are very special to me. One is Cherokee 47656, a PA-28-160 in which I did most of my pre-solo training at Ann Arbor Municipal Airport. Another is Cessna 94891, the Cessna 152 in which I did my first solo training out of Willow Run Airport (and which, by the way, got bent by a student pilot long before I flew her, but came out of the shop as good as new).

18 was special to me because she got me through the final push for my private pilot certificate. I flew her with flight instructor excraordinaire and now King Air captain Eamon Burgess in late 2003, got re-soloed in November of that year, did my long cross-country with her in January of 2004, and took and passed my checkride with Mary Carpenter in February of 2004.

The most beautiful VFR flight I've ever made was my long solo in 18. Well below freezing that January day, but severe clear. I could see 60 miles or more from up there at five thousand feet.
In fact, the picture I use of myself for the podcast was taken on that flight as I headed back for Pontiac on the last leg of the flight.

I've reacted in a few ways in particular to 18's demise.

I pay more attention now to my landings. Which is to say that I start the process well out there on approach, getting stabilized in my pitch attitude, power, airspeed, and ground track. I don't settle for anything less than the exact centerline and a precisely parallel lateral orientation with any crosswind.

I also lost another notch of respect for mainstream media. Now you guys know that it's not in my nature to badmouth anyone. Even when I took the media to task this year about not understanding what an aerodynamic stall is or completely misunderstanding the national security threat posed by general aviation, I tried to make it an educational and collaborative thing. But ignorance and rudeness are two different things. So let me rant a little here.

A local TV reporter reported from a helicopter taking telephoto shots of the inverted 18. Here's a clip from the report. Listen to this guy's closing comment.

What a jerk! No, not any landing you walk away from is a good one. My favorite airplane lay there on her back with her wheels pointed skyward and an earnest student pilot with lofty goals had just had the crap scared out of him.

A good landing brings the airplane back to the ramp in good shape in time for the next student to do his preflight. A good landing sometimes even gets praise from the tower. Hundreds of good and graceful landings happen every day at Pontiac and tens of thousands of them take place every day throughout the world.

And this guy - a guy in a helicopter no less - makes a comment like that. I hope the chopper pilot treated him to a no-warning autorotation on the way home.

I know that most reporters try to do a competent job and don't intentionally say insensitive stuff like this, but, by golly, when you start circling my favorite aircraft at my favorite airfield, you better bring your A-game with something intelligent to say or just shut off your mic.

And what does the public see and hear? Not the hundreds or thousands of safe and even graceful landings that happened that day in southeast Michigan. They get a knucklehead who gives the impression that every flight is a dance with death and it's a miracle that we aviators don't rain down fuselage parts on innocent people every day.

We're never going to be able to adequately educate the media about general aviation. We can't count on these people to know what they're seeing or hearing or even to try to find out.
The best thing that the general aviation community can do is to renew and improve its commitment to training and safety so that we give the media as little bad news to cover as possible.

Lastly, I'm just plain going to miss that aircraft. She was rigged right and she flew well. But that they say that about me when I'm gone.

She had an audio jack for a CD player or iPod and she sang to me over the lonely winter landscapes of southeast and central Michigan. She stalled like a sea turtle and gave me plenty of opportunity to recover. I fly at a school that has five nearly-identical Cessna 172Rs on the ramp and I can get by with any of them. But any pilot will tell you that no two aircraft fly exactly the same. Each aircraft has its own shuck and jive - its own little dance into the flare - its own little burble in the stall. I'll miss 18 because I always felt more like a pilot when I flew her.

But there are other airplanes. And the accident pilot is fine. He got back in the saddle the next day. In fact, I saw him taxiing back to the ramp a couple of weeks ago with his instructor.

I'll finish the instrument rating in 16 or 20 and it'll be fine, but it'll be different. Maybe friends and things really do come in and out of our lives like busboys in a restaurant. But that doesn't mean that we don't notice when they do. Maybe I'll use her tail number someday on the CTAF at a deserted little untowered field, just for old time's sake.

In other news, there’s a new podcast in town. It’s called Uncontrolled Airspace and it’s hosted by Aviation Safety editor-in-chief and Avweb contributing editor Jeb Burnside, aviation photographer and journalist Dave Higdon, and web developer, technology consultant, marketing communications advisor, and freelance writer Jack Hodgson. I listen to a fair number of podcasts and Uncontrolled Airspace is the best hangar-flying-format podcast I’ve heard so far. All three of the hosts are expert in their fields and you’ll find lots of authority and grizzled pragmatism in the show (although they might argue among themselves about who’s more grizzled and who’s more pragmatic). You can subscribe to Uncontrolled Airspace through iTunes or your favorites podcast aggregator or visit the podcast’s website at http://www.uncontrolledairspace.com/. No affiliation yet with Airspeed, but I dropped them a line right after their second episode and they were kind enough to give me a mention on their show.

Posted by Stephen Force (Steve Tupper) at 12:30 AM