In the Studio Recording Thunderbird Groove 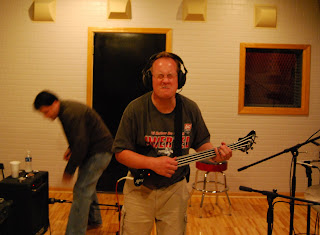 This is a regular blog post. Looking for show notes or links to show audio? Please check the other posts.


I’m rockin’ the suburbs
I’ll take the checks and face the facts
Some producer with computers
Fixes all my sh*tty tracks.

Yeah, I’m a Ben Folds wannabe in many ways. And last night’s activities put a little finer point on it.

I spent four hours at The Soundscape Studio in Royal Oak last night recording the incidental music for the Thunderbirds summary episode. Definitely in the suburbs. It's on Rochester Road near 13 Mile Road in the norther Detroit burbs about 20 minutes south of my house.

This is the first time I’ve ever recorded in someone else’s studio and it was a real treat. I took in my drum kit, two basses, an acoustic guitar, an electric guitar, and lots of other stuff.

The objective was to come out with backing music that I could use for the Thunderbirds summary episode, in which I’ll give a fully-produced account of the ride. I needed a driving and repetitive theme to back some of the commentary and drive some of the moments.

I started with a guide track that consisted of a basic drum beat at 62 bpm along with my voice counting off groups of measures and also cuing the transitions. I had the guide track going throughout the session so that I could synchronize everything and figure out when I needed to change stuff.

The piece is 10 minutes long. Most of it is pretty much the same repetitive figure in E, but I changed up the drum cadence (snare and high-hat only, straight cadence, and a triplet cadence on the kick drum) and the guitar figures on occasion to create maybe five or six different flavors in the piece. There’s also a chorus (if you can call it that) that uses power chords on electric guitar. That appears twice – Once about five minutes in and again about eight minutes in. That way, I have two climax points that I can use in the episode. The first will probably be the big pull on takeoff and the second one will probably finish out the episode.

Also, I used the Ashbory bass (pictured above) for the fretless, more acoustic sound in the first five minutes and then switched over to a Washburn electric bass beginning with the first chorus.

It’s not going to air as a full ten-minute piece. Rather, I’ll pick the appropriate parts when I get to the editing and dump in maybe 30 seconds here and a couple of minutes there. It didn’t really need to be 10 minutes long. I could have recorded a whole bunch of two-minute variations. But I didn’t want to have to record a whole munch of separate guide tracks and it also lent a cohesive frame of reference to record everything as a single stream. 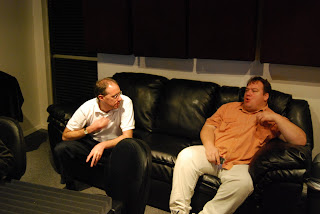 That’s Stuart Logan, one of my partners in the law firm, and Jim Kreucher, my best friend. Stuart is a student of may musical styles, but is especially a maven of 1970s punk. I met Kreuch in 1983 during our junior year of high school. When we build a recording studio in Hillsdale, Michigan (yeah, we built a recording studio in Hillsdale, Michigan – long story), I did a couple of albums of my own in there and Kreuch spent countless hours at the console engineering the stuff. He’s also a good rock vocalist, though he insists that he’s not.

Stuart and Kreuch joined me to schlep stuff in from the car and to generally hang out in the studio. 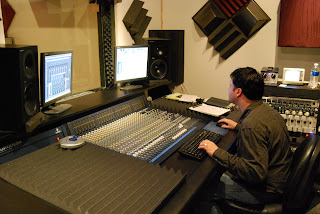 Tim Smith engineered the session and is doing the mix back at the studio as I write this. He plays drums for Zug Izland and most recently appeared live at the Juggalo Gathering on the main stage with Ice-T, Three Six Mafia, and 2 Live Crew in Cave in Rock, Illinois. He’s a genuine, skilled, and down-to-earth guy who thankfully didn’t laugh at my bringing in way too many instruments, obviously having too much else on my plate to have fully prepared the music, and having to stop and punch in a lot.

Having recorded myself for years and years, it’s really nice to be in a facility with the right equipment and have an engineer who understands how to mic everything. All I had to do was tell him what we were recording next and prepare to play the instrument. Tim immediately miced it out and had me ready to go. If there are any deficiencies in the recording, it’ll be with the performer, not the engineering.

By the way, I’ll have Tim’s mix to use in thinking about how to incorporate the piece into the episode, but I’m also sending the session to Scott Cannizzaro to see what he can (or wants to) do with it. Scott is the studio wizard who worked up the Airspeed theme music a few months ago and did simply amazing things with it. You probably heard the discussion on the episode featuring Scott. 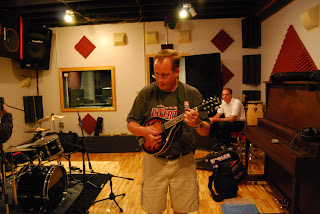 Goofing around on mando. I brought a few other instruments in case we ended up having extra time. We ended up finishing recording with maybe 35 minutes to go, but decided not to try to do another piece. Frankly, I could have done all of the recording at home to an acceptable level (to me anyway), but I really wanted to use acoustic drums for this piece and the only real answer was to get into a studio with someone who had the right equipment and expertise. I can do any of the other fussy bits at home. They won’t be the quality that Tim achieved in terms of engineering, but it was time to knock it off for the evening. 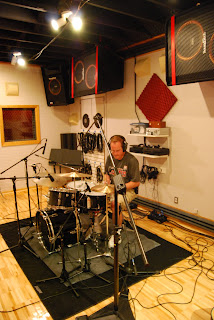 Nice shot of the drum setup. Microphones everywhere. A good old Shure SM57 on the snare, RØDE mics for the ambient overhead stuff, and others to which I didn’t pay attention. I’m pretty pleased with what I heard in the control room when listening back.

I picked up a Pearl Joey Jorison Signature snare drum late last year. It’s all-metal and just cracks every time you hit it. I let the thing ring because I like that sound. I have at least one friend who sticks a maxi-pad or two on his kit to cut the ring, but I think that the metallic ring gives the snare a more business-like, slightly industrial sound. I could beat that snare all day. More 8K hearing loss anyone?

Anyway, the piece is recorded and I should have a preliminary mix this weekend. Scott will get a FedEx with the session DVD sometime next week, and I’ll get to writing. The session was a lot of fun. I could have played better. I just didn’t rehearse enough. But it’s going to be great for the intended purpose. And, after all, it’ll have the benefit of me mixing it into the episode, Tim’s engineering stylings, and possibly Scott’s mad skills in post. Producers with computers fixing all my sh*tty tracks