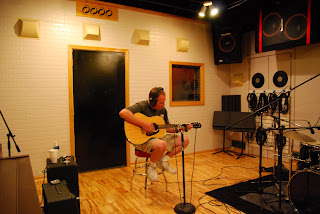 This is a regular blog post. Looking for show notes or links to show audio? Please check the other posts.

More on the suburb rocking.

Here’s the acoustic setup. The same two RØDE mics, only set up on a single stand offset at about a 45-degree angle and about 18 inches from the sound hole. That’s an Applause acoustig guitar with a plastic round back. I got it in 1985. It’s a step down from the Ovation guitars of the time, but it really sounds good. It has a really bright sound and I use XL acoustic phosphor bronze strings on it to make it as bright as possible. The strings on it are at least a year old, but I haven’t played this guitar that much during that time, so I got a good sound out of it. Mostly repetitive stuff on the lowest three strings and letting the others ring a little as appropriate.

I was not ready to play for ten minutes straight and was hurting pretty bad for much of the takes. I got about seven minutes in on the first take before having to take a break. But I think we only had to do a couple of punch-ins. I liked what I heard in the control room. I’m sure there are miscues somewhere in that 10 minutes, but I’m optimistic about how it’s going to turn out. 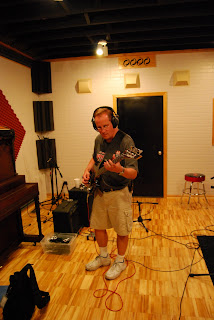 Electric bass. This went pretty well. I think I flubbed a few things, but let’s face it: I’m a guitarist who owns a couple of basses. There’s a difference between that and an actual bassist. 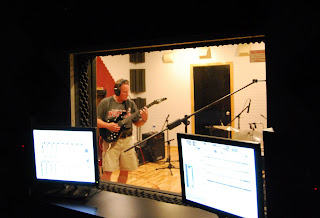 Laying down the power chords on my trusty Carvin DC-127T. I got the money for this guitar by using my mileage checks from inspections of foreclosed real estate when I was a foreclosure property manager for a bank here in southeast Michigan. You could say that I traded apart of a 1989 Ford Tempo for it. Really nice studio guitar. Wish I had more time to practice with it.

The fluorescent lights in the control room caused a lot of hum in both the Washburn bass and the electric guitar. Thus the dark foreground. Tim shut out the lights in the control room and that took care of most or all of the problem. Kreuch took this through the window while standing behind Tim at the console. I don’t like using flash much for photography (although I’m not like the National Geographic guys who never seem to use it and always seem to have blurry shots whenever they’re in low-light situations). Thus, I didn’t show Kreuch how to use the flash. A good thing, too, because that would have goofed up this shot. Kreuch was rock-steady to get this shot, considering that the shutter speed must have been something like 1/4 sec.

Can’t wait to get the music finalized, write the commentary, and get down to recording and editing the episode proper. Stay tuned!