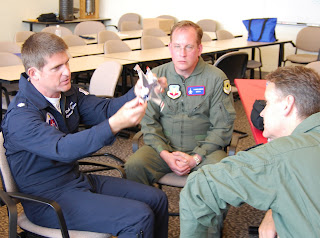 These are the show notes to an audio episode. You can listen online right here by clicking: http://media.libsyn.com/media/airspeed/AirspeedThunderbirdsBriefing.mp3.

While I’m working on the music and other elements of the summary episode for the Thunderbirds ride, I thought I’d tease you a little more. As you know, I was the alternate, but got called in to suit up in case the primary rider’s camera crew failed to show up. (You gotta love ace photographer Tim Reed, who was there for me, camera in hand and snapping away. Thanks, Tim!)

After about 45 minutes, I had caught up to the primary rider in the suit-up procedure and I joined him for the preflight briefing with the demo pilot, LtCol Rob Skelton, the Thunderbirds’ Operations Officer. Here’s audio of that briefing.

As you’d expect from a squadron with the reputation of the Thunderbirds, the briefings were remarkably similar and that speaks very highly of the team’s standardization of procedures. You’ll be able to tell when you hear the excerpts from Maj Mulhare’s briefing in the final episode.