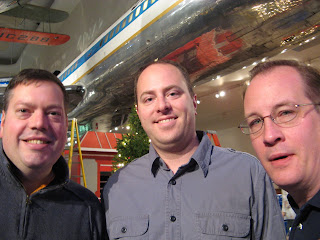 This is a regular blog post. If you’re looking for show notes or links to show audio, please check out the other entries.

I attended my law firm’s partner meeting in Chicago this past weekend. On Sunday, I connected with Rod Rakic and James (jetstew on myTransponder) to have breakfast and hang out. We his Orange on Harrison for breakfast and then took a cab to the Museum of Science and Industry. Really cool to go to that museum with a couple of pilots and walk around talking aviation and aerospace. Wyen I go to a museum these days, it’s usually with the kids and I’m pointing stuff out and playing tour guide to make sure that the kids get the important stuff.

And, yeah, I admit that I’m often tempted to bring along Post-It Notes and stick little corrections on some of the exhibits, but that’s how I roll. 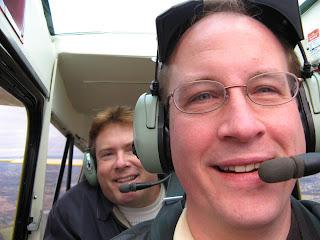 Monday, I snuck out at the end of the day and got 1.8 hours in the Citabria. Started out with wingovers, loops, and rolls. Clearly, my aerobatic tolerance has gone away since the summer. I was done after about 25 minutes and feeling about 60/40 that I might hurl. Not beating myself up. It’s just that I have another data point about what kind of duration my aerobatic tolerance has. I’d really like to go up twice a week for a month and see where the tolerance goes. I’m pretty sure that I could get back over an hour again and actually put together series of maneuvers and fly a routine. (How cool would that be!)

But that’ll have to wait until after the first of the year. The usual end-of-year push at the office is in full swing and I need to bust out some work.

We went to Lapeer (D95) and did six or seven takeoffs and landings. Stiff 14-knot crosswind, but I managed to really nail the last few landings. I think I might have had a breakthrough in tailwheel technique. I’ve been stirring the coffee way too much. If I just get the airplane reasonably aligned by the time I’m 200 yards from the threshold and hold the stick pretty still laterally and control the touchdown with pull, I seem to get it nailed down. Proper position of stick on rollout is tucked right there next to the windward gonad.

It’s really kind of like my experience finally getting the landing as a primary student. One day, I couldn’t seem to get it and the next I was greasing them in. Yes, there are some empirical things I can point to, like stick position and relative amount of coffee-stirring, but it’s mostly kinesthetic. You experience success a few times and get a sense of it. I wish it were more empirical, but it isn’t. At least not for me. 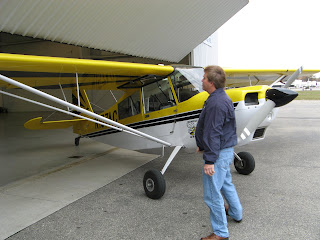 I need to do an entry on cold-weather flying. If you can get the ceilings and the visibility, it’s really wonderful. The airplane climbs well and aerobatics seem even more fun.

Sutton Aviation has a new Super Decathlon on the ramp. Which might not be such a big deal except that you can actually rent it! I don’t know of anywhere else in southeast Michigan where you can rent a Super-D. Yeah, you have to get checked out in it, but that’s true of any rental. Yeah, the Super-D is a lot of airplane and it might take some more effort to get the checkout, but it’s a Super-D, after all.

Posted by Stephen Force (Steve Tupper) at 8:04 AM