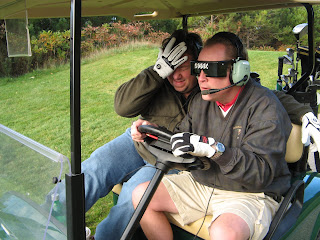 These are the show notes to an audio episode. You can listen online right here by clicking: http://media.libsyn.com/media/airspeed/AirspeedYMBAP.mp3.

The following was compiled from Twitter responses to an Airspeed request for things that might indicate that one is a pilot. With apologies to Jeff Foxworthy.

You describe the weather in METAR code in casual conversation.

You cause a traffic slowdown passing the airport because you’re scanning for traffic and identifying departing and arriving aircraft.

You perform a flow check when starting your car.

Your personalized license plate is something only another pilot would get (LAHSO, SIMOPS, TU, etc.)

When your watch has more features than your first computer.

You read back your fast food order at the drive-through and end it with your license plate number.

You ever thought of a playground swing as a steam catapult.

You’ve ever missed an anniversary, the birth of a child, or a spouse’s birthday because the ceiling had finally come up to 1,500 AGL.

You preflight your car.

The first thing you do when getting on a United Airlines flight is tune to channel 9.

You secretly get angry with aviation podcasters because they can't keep up with your need for MORE material.

You plan a romantic trip with your significant other to Dayton but forget to tell him or her about the six-hour detour at the USAF museum.

You’ve ever inadvertently slammed on the brakes in your car because you intended to command left rudder.

You bring taxiway diagrams, en route charts, and approach plates along as a passenger on a commercial flight so you can follow along.

A burly man with a government haircut and a bulge under his suit jacket has ever moved seats to sit closer to you upon noticing all of your taxiway diagrams, en route charts, and approach plates.

You have an airline safety demonstration loaded on your car mini-van DVD player or your aircraft MFD so you can play it for your friends.

On the highway on-ramp, you think of yourself as joining Victor whatever and resuming own navigation.

You gauge the all income and expense in terms of flight hours represented.

You've told everyone you know that the only gift you want for Christmas, birthday, Father's Day, etc. is flight time.

You’ve ever kicked the tires on a static display at Oshkosh.

You’ve started a podcast and poured untold hundreds of hours and thousands of dollars into it on the theory that it might one day get you a ride with a military jet team.

You've ever walked out of the Kennedy Space Center gift shop with more than $500 in merchandise.

You secretly enjoy telling your boss “roger” instead of “wilco.”

You'd look up at the sound of an engine overhead even if your guy was on one knee proposing.

If you've ever popped the clutch on you car causing the engine to “quit.”

You've ever watched a depiction of aviation in a mainstream movie and said, “Oh, puhlease!”

You've ever scared the hell out of a floor salesperson at a Garmin store by marching to the big G1000 display thingie in the back and appearing to know what you’re doing with it.

The GPS Velcro-ed to your car dash weighs more than five pounds and contains FBO data.

You do a GUMPS check while turning final. Into the driveway.

When your kids ask what kind of cloud that is, they get a science lesson.

If you refer to your car by the last three characters of the license plate (e.g. the Ford is “three niner golf”)

You have only two expressions for weather. VMC and IMC.

You’ve gotten a flight briefing using the speakerphone in your office hoping that your coworkers would overhear and be impressed.

You’ve ever used the phonetic alphabet while making a restaurant reservation.

You have more than three spare flashlights on your person.

You plan a road trip with a nav log, a plotter, and an E6B.

You’ve ever identified your highway exit and then contemplated which STAR will take you into town.

You've ever tried to slow your car by pulling on the steering wheel.

You've ever unconsciously started to drive down the road with the yellow line under the middle of your car.

You’ve ever fantasized about the flight crew on your commercial flight “having the fish” so you can charge into the cockpit, take the controls, and save the day.

You “go on the gauges” when you hit a rain squall while driving.

You go to accelerate in the car and reach for the center console.

You wish the compass in your car read 315 instead of NW.

You want an altitude readout in the car's GPS, speed trends, and distance to stop calculated in real time.

You call the local ASOS or AWOS for weather, flying or not.

You use “niner” in everyday speech.

You bring your headset to the showroom when shopping for a new car . . . and leave when there are no phone jacks in the panel . . .

You complain when the spoiler on the car can't move up and down.

When you go to start the car, you roll down the window and shout “CLEAR!”

You’ve ever been on a rough road and called the state police road-condition hotline to ask for higher.

You have an iTunes playlist called Current Flying Podcasts.

You have more than three iTunes playlists associated with flight.

You have an iTunes flight-related playlist entitled “If They Leave the Keys in the F/A-18 and I Can Find an AUX Audio Input.”

You wish that spiral staircases would just go on and on and on.

You switch off your car's engine once you are on top of the hill.

You turn tight when you hear a beep beep beep sound.

You love roundabouts but keep craning for all the cars around you.

Wherever you go, you make sure that you have third waypoint on the way back.

You've ever tried to slow your car by pulling on the steering wheel.

You've ever unconsciously started to drive down the road with the yellow line under the middle of your car.

You "go on the gauges" when you hit a rain squall while driving.

I remember one time after an unusually long flight-lesson I was driving home... And when I went to give the car some gas to get moving, I went for the center console instead of the peddal.

- you wished the spiral staircase would go on and on and on
- you switch off your car's engine once you are on top of the hill
- you turn tight when you hear a beep beep beep sound
- you love roundabouts but keep craning for all the cars around you
- wherever you go, you make sure that you have a 3rd waypoint on the way back
- you do it silently ;-)

You wish the compass in your car read 315 instead of NW.

You want an altitude readout in the car's GPS, speed trends, and distance to stop calculated in real time.

You call the local ASOS for weather, flying or not.

You use "niner" in everyday speech.

haha Jack. I've driven over the line before realizing I wasn't taxiing.

...you bring your headset to the showroom when shopping for a new car...and leave when there are no phone jacks in the panel...

...you complain when the spoiler on the car can't move up and down...

...when you're on a rough road and call the State Police road-condition hotline and ask for higher...

YMBAP if you go thru the DriveThru at Micky-D's and confirm your order: "Readback is correct"!

You don't get why people like to smoke recreational drugs... you've got Jet-A!

You lie to your family, and tell them you're constipated, when really you're just reading back-issues of your favorite aviation magazine.

When you go to a state that doesn't allow you to pump auto gas on your own... everyone has to hear about how silly that is, and that you commonly refuel aircraft!

Your iPhone is packed with all sorts of aviation related apps.

You've ever considered buying a scrapped Boeing 737 cockpit to turn into a simulator.

Your family and friends finally break... and tell you they're sorry, but they really can't handle hearing about flying anymore.

Instead of reading the newspaper... you're busy catching up with the latest NTSB reports.

You get someone in an orange vest to guide you into and out of your driveway.

You save olde charts to use as
gift wrap.

Your significant other says, "Thank
You," after opening your gift of
[cough] clothing emblazoned with
REMOVE BEFORE FLIGHT

You hit speed-limit on the freeway and call out 'Rotation Speed' although quietly.

You use the cruise-control up/down in your car and think you are "trim"-ming your ride.

You take your leg off the gas pedal few blocks from home, and check whether you can make it to your drive-way in a 'simulated engine failure' scenario.

When caught in traffic in a long road-trip, you immediately blurt-out how easy this would have been if you flew to your destination.

You actually say 'Cruise control ON' before turning on the cruise control in your car. (like you hopefully would for FLAPS ON)

You hold steady your steering at constant bank in a 'circular' on-ramp, like you practice for steep turns.

You wonder whether S-turns will avoid you from using your brakes when vehicular traffic ahead of you slows down.

You mention and point out every VFR callup point on your chart (from the ground).

You've explained in detail why you don't need to take a parachute to family and friends.

When you say "ready to copy" when someone is about to give you their phone number.

If you rearrange the groceries to the best weight and balance for your car's specs.

You make sure the hangar rent is paid before the mortgage...(don't deny it)

You give your address using VOR radials and distances