How a Pilot Does Thanksgiving - Turkey at the Hangar! 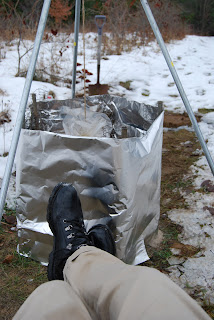 This is a regular blog post. If you’re looking for show notes or links to audio, please check out the other posts.

It might be overcast with low icing on Thanksgiving in the KTVC Class D airspace, but that doesn’t mean that you can’t hang out at the airport and get your turkey done! Hangar-side! Using a rig that you can actually carry around in a C-152 with full fuel!

I learned this in Boy Scouts a long time ago and have since perfected the process. It’s an excellent means of smoking cigars and drinking your choice of beverage outdoors for extended period of time and it’s one of the few ways of doing so that is likely to result in a beautifully-cooked turkey!

It's mostly useful for camping and other outdoor applications, but why in the world would you pass up the opportunity to use this method next to your hangar at the airport? 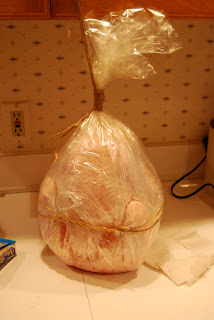 Double-bag the bird in Reynolds oven bags (turkey size). Orient the bird nose-down with the leg bones sticking up. Get some binder twine and tie the bags closed at the top using a wrap-style fastening (much like the coiled part of a hangman’s noose. Double the twine because you’re going to be dangling the bird from the protruding length for three of four hours and you don’t want the twine to break or stretch too much.

Also loosely tie some twine around the widest part of the bird to keep those square corners of the outer oven bag from sticking out and getting burned.

Using a knife or the Phillips screwdriver from your fuel tester, poke a couple of holes through both bags about three inches below the know to let steam escape. 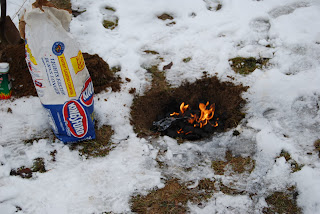 Start about 50 charcoal briquettes going in a pit nearby so the charcoal is good and gray around the edges by the time you’ve assembled your rig. About 25 minutes. 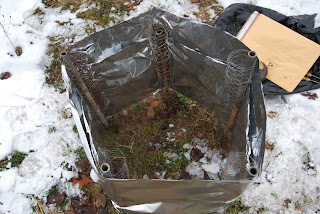 Pick a grassy spot next to the taxiway (preferably outside the movement area of the airport and near your hangar) for the rig. Mine consists of five two-foot lengths of electrical conduit and five tubes of chicken wire about 3.5” to 4” in diameter. Drive the stakes at the points of a pentagon and drop the chicken wire tubes onto the stakes. You should be able to dangle the bagged bird down between the stakes with at least 8” of space between the widest part of the bird and the nearest chicken wire tube. Try for between 8” and 12” on all sides of the bird.

You can get away with four stakes, but I find that you have to make a square shape too big to keep the wide part of the bird from getting too close to the corners of the rig. Five is orders of magnitude better.

Wrap the entire apparatus in tin foil. I use the 18” industrial foil and go twice around so you have coverage up to about two feet off the ground. The foil both breaks the wind flow around the bird and reflects some of the heat from the charcoal back toward the bird. 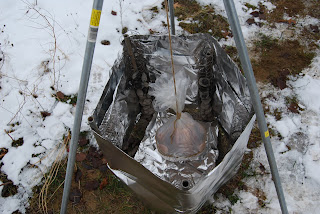 Drop a sheet of tin foil on the ground to cover the floor of the rig. Then, using tongs or other tools, drop about 10 charcoal briquettes into each chicken wire cylinder. The rig is ready.

Dangle the bird into the center. I use a tripod made of three five-foot lengths of electrical conduit. If you happen to have an engine hoist or other interesting equipment in the hangar, feel free to be imaginative. Don't use the wing of C-172 if you can help it. Or, if you do, don't use the left wing, which has the fuel vend right next to the best attach point. 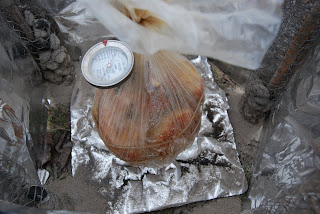 Now drink the beverage of your choice and smoke good cigars until the bird is done. About three hours for a 14-16 –pound bird and maybe up to four for a 23-pounder.
You might want to douse the bird in some beverage every now and then to make sure that the twine wrapping the bird doesn't catch fire. That could compromise the bag(s) and get interesting. Remember that, after the bird really gets cooking, you have a bag of heated flammable liquid in close proximity to ignition sources. In other words, a dangling turkey-fat bomb.
Don't leave the bird unattended. Both because you want to be able to deal with any potentially explosive contingencies, but also because there are beverages to be drunk, cigars to be smoked, and hangar-flying to be done and the volatility of the bird is an excellent excuse to stay at the airport continuously doing these things.

You’ll probably need to start another couple of rounds of charcoal and add briquettes to the rig as the earlier briquettes burn down. But resist the temptation to load the rig to the top. This year, I did a 16-pounder in 2.5 hours with the cylinders only half full and the KTVC METAR temperature hovered around freezing the whole time.

The nice thing is that the bags keep the bird moist even if you hit 170 early and have to keep it dangling longer. 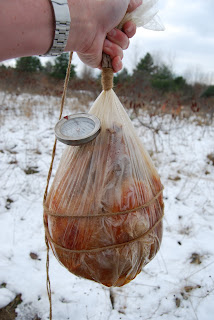 Here’s the bird, just extracted from the rig. Eat right there at the hangar or take it home. It’s up to you! 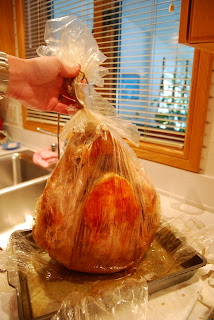 With the outer bag removed and about to remove the inner bag. Just look at that golden brown! Not also the sag of the bird in the bag. It just completely loosens up and basted in its own juices. We didn’t brine this bird or do anything else other than put two sliced lemons in the cavity. Note that the amount of liquid preserved inside the bird makes this method a poor choice if you want to do the stuffing inside the bird, but modern technology makes separate stuffing a breeze. And it more than makes up for the non-conventional stuffing in the extra juice available for gravy. 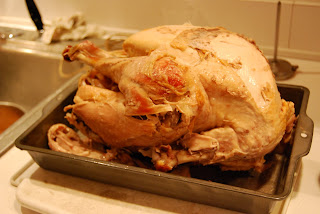 Ready to carve. Actually, if you do this right, you can sometimes just reach in and pull the bones out and take the bird directly to the table. Carving becomes mostly unnecessary.

Always moist, always tasty, and a great way to do your bird at your hangar or any other outdoor venue. Happy Thanksgiving, everyone!
Posted by Stephen Force (Steve Tupper) at 12:21 PM