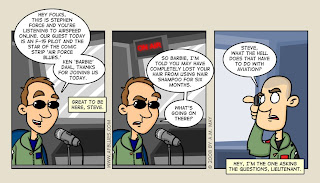 These are the show notes to an audio episode. You can listen online right here by clicking: http://media.libsyn.com/media/airspeed/AirspeedAFBlues2.mp3.

With this episode of Airspeed, we welcome back one of our most popular guests, Austin “Farva” May, the author of the stupendously popular web comic, Air Force Blues.

Farva started drawing Air Force-related comics in 2003 with the series “AWACker,” named for the term given to anyone involved in the operations of the E-3 Sentry AWACS aircraft. Farva was an airborne surveillance technician on the E-3 for four years.

In early 2007, Farva launched Air Force Blues, a web comic that features F-15 driver 1Lt Kenneth “Barbie” Dahl and a cast of characters that runs the gamut of Air Force personalities, locations, and situations. Since then, the comic has spawned a substantial fan base, an expanded website, and one book.

We last talked to Farva in May of 2007, so let’s get an update on what’s happened over the last 18 months.