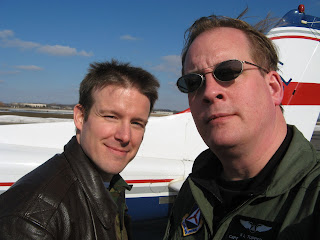 This is a regular blog post. Show notes and links to show audio are in other posts.

I passed my CAP Form 5 instrument checkout for Category 1 aircraft (like the C-172R with steam gages that we flew). If you want to be a CAP pilot, you have to, in addition to possessing all of the required FAA qualifications, pass a CAP-administered checkout each year. It’s done on CAP Form 5 and many refer to it as the “Form 5 checkride” or just “getting Form Fived.”

Capt Alex Craig administered the checkride. Two of us got our rides successively, first me and then SM Scott Gilliand. Scott is a newer private pilot and was doing the VFR checkride. I did the VFR Form 5 in August and was adding on the instrument checkout. 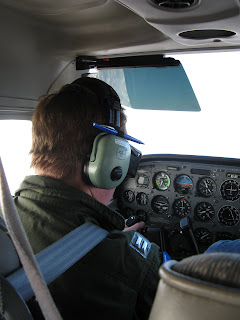 I was first to fly. I planned and filed an IFR flight to Grand Rapids (KGRR) using airways. We diverted at HARWL, flew a hold there (one turn partial panel), and then shot three approaches in to Jackson – Two VORs (one partial panel) and one ILS. I think we were in actual for part of the way there. My hood covers the windshield reasonably well (and I sit low to allow full control travel over my kneeboard), but there’s always that little part of the window down and left that’s hard to block. I’d rather block it. It’s disorienting sometimes.

I passed, but it wasn’t spectacular. I blew a couple of things. Nothing awful or unsafe, but nevertheless not perfect. Alex gave me a deserved admonition to go get a safety pilot and get the rest of the rust off. And I’m planning to do just that.

Frankly, the IFR add-on was so that I could fly a little more capably when Norm Malek and I get out and start covering a lot more of Michigan this summer. We’ll both be CAP qualified instrument drivers and we’re getting pretty good at our CRM rhythm. That makes for a very capable aircrew and we’re going to fine tune it even more. 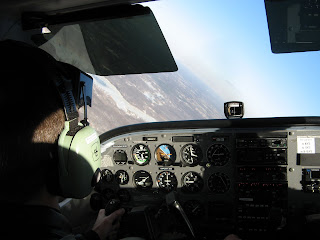 Alex quipped that Scott, as a lower-time pilot, was likely to fly very well because he had no bad habits to break and was likely still flying to private PTS or better. And, in fact, Scott flew very well. He nailed the airwork and did a lot of it to ATP quality with the needles just frozen in place. Not bad at all for his first time in this airplane! I was really impressed from the back seat. 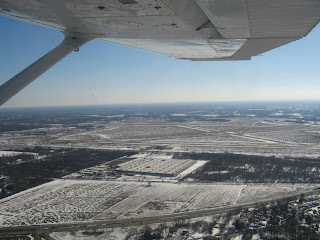 We did Scott's pattern work at Willow Run (KYIP). It was a really nice day with light winds and clear sky. Here you can see the steam from the Fermi II nuclear plant a long way off with Willow run in the foreground (we're on a right downwind for 23R). That's the kind of plume that tells you that there's not much going on in terms of winds aloft. 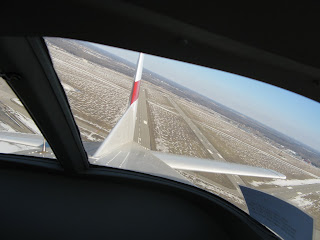 I don’t get to ride in back much at all. In fact, this was my first time in the back of a C-172 since I was a kid. We paid very close attention to the weight and balance on the flight. We were 25 pounds short of max gross and in the back third of the CG envelope (but well within it). I took a lot of pictures and had a pretty good time. It was also great to be able to just sit there and watch someone else take a checkride. It gives you time to think about your own flying and identify procedures that you’re missing or that you might want to add to your own tool kit.

Ann Arbor (KARB) was swarming with airplanes. This was the first really nice day in a long time and it seemed like everyone was out for a few trips around the pattern. Even people hanging around the ramp who weren’t flying, just so be there and watch. We were number three in the conga line on the way back in to 24 and it was clear that the pattern was pretty full. Willow Run, just a few miles to the east, is a really well-kept secret. We had 23R to ourselves the whole time we were there. It’s still my favorite airport.

On to more cross-country go-places flying this summer!
Posted by Stephen Force (Steve Tupper) at 6:00 AM

Wow, I actually made it into an Airspeed post! I have finally arrived! It was a great day for flying and I learned a lot; what a great experience! I am very proud to be CAP.