First Flight in the Super Decathlon 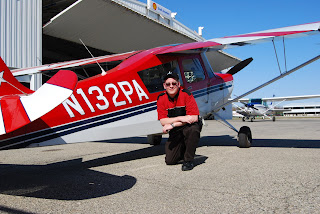 I’ve been flying the Citabria Aurora at Sutton Aviation since last April. No flies on the Citabria and I really like that airplane. 118 hp and great flight characteristics. But the Super-D has 180 hp, about 2.5-ft shorter wings, inverted fuel and oil systems, and a constant speed prop.

The Super-D has enough power and maneuverability to really rag you out if you want to go up and do that. And that’s exactly what I set out to do yesterday. I have a military demo flight scheduled for May and I need to go up and start rebuilding my acro tolerance so I’m good to go for the flight. Not that I have any problem hurling when it’s called for after a reasonable amount of maneuvering, but my tolerance is way down from last year. That’s okay. Even airshow performers have to build up after a long winter by flying progressively longer aerobatic sessions.

My tolerance is at about 20 minutes with some breaks between maneuvers. The best I’ve ever had was about an hour straight last right after the Thunderbirds ride. The goal is to try to fly every week or so between now and mid-may to build that tolerance back to an hour.

And the Super-D is the right platform for that. Because of the better power and the inverted systems, Barry Sutton, my acro instructor, added the Immelman (a half loop after which you roll right side up at the top), knife-edge flight (rolling to 90 degrees of bank and then kicking in all of the top rudder to fly sideways), four-point rolls (stopping the roll at 90, inverted, and the other 90 before rolling wings level), and rapid aileron rolls. We also did a hammerhead.

The Super-D makes the old maneuvers more intense because the additional power means that you can do aileron rolls in level flight without losing lots of altitude as with the Citabria and you get a lot more hang with the hammerheads. You can’t quite helicopter up there with two full-size humans in the aircraft, but you get a lot of hang. And the Super-D makes the new maneuvers possible, mostly because you can add sustained inverted flight to the repertoire.

I’m looking forward to flying this aircraft a lot more over the next few weeks!
Posted by Stephen Force (Steve Tupper) at 7:18 AM