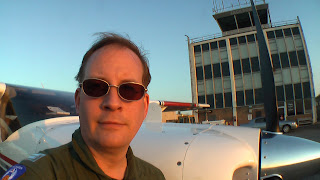 4.5 behind the glass yesterday. This was Flight Scenario 2 in a four-flight series learning to fly a CAP Cessna 182T Nav III with the Garmin G1000 glass cockpit. We launched around 4:00 local and got back around 9:00 with a break at KJXN for fuel and bio break.

A pretty exhaustive flight. From KPTK up to KBAX with the RNAV 22 and published miss and hold, over to KMBS with the ILS and published miss, then to KJXN for the VOR 24 before heading back to KPTK for the LOC B/C for 27L. The idea here was for me to do most or all of the flying and the operation of the G100 and the GFC 700 autopilot.

This I did. I competently navigated the aircraft, but clearly have a bit of learning to do when nonstandard stuff happens. I was fine when Cleveland Center routed us over to the Peck VOR (ECK) instead of giving us a couple of intersections for which I had asked. It has something to do with the limitation of radar coverage by Cleveland Center over there in Michigan’s thumb.

The issues I’m having have largely to do with how to pick up an approach from various places, including how to get the airplane to fly an approach from some intermediate point on the approach. I’m fine if I’m going to fly the thing full-procedure from the IAF. But the moment a controller tries to be helpful and set me up for something less than the full procedure, everything goes to hell and I end up flying it with the heading bug and controlling the VNAV myself with the VS key and the Nose Up/Nose Down. I know that the avionics are capable of doing a lot more than I’m squeezing out of them and that’s both frustrating and a motivation to hit the books and the Garmin-provided PC Trainer to nail it down before the next flight. 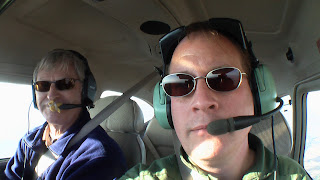 As ever, Michigan Wing check airman Capt Tim Kramer was there in the right seat. A lot more quiet this time, as is appropriate for this scenario. Tim did a lot of explaining on the first scenario flight last week. This week was all about letting me figure out when I had problems and at least describe the problem, if not fix it.

I’m having that slightly bewildered feeling that usually proceeds a few critical “a-hah!” moments. I’m going to spend some more time with the manual and the PC Trainer to see if I can work out these kinks. I really want to competently fly the next flight with the avionics taking me all the way to minima. Because I’m also going to have to deal with failures and related stuff on that next flight and I really need to have my poop in a group on the fully-functional platform before dealing with failures.

The plan is to fly Scenario 3 and then do a fourth flight to put it all together and get the rest of my CAP-required 25 landings before the Form 5 checkride with the wing check airman. I’m planning to fly with LtCol Leo Burke, with whom I’ve not yet flown, the better to get to know him and to fly with as many of the wing check airmen as possible. You learn something new every time you fly with a different check airman and I’m looking forward to that, too.

Once you have the approach selected, you can press FPL to get to the flight plan page, push the FMS knob to activate the cursor, turn the large knob to select whichever intermediate leg of the approach (or anywhere else in the flight plan) you want to fly, and then either push the "ACT LEG" soft key or push the Menu button and choose Activate Leg. :-)

The G1000 is easy to use as far as glass panels go, but there's still a ton of functionality that's really not obvious, this certainly being in that category! You can read the manual all you want, but to really get it to "stick" you have to do it in the airplane. So, the best way I've found to learn this stuff is to go on a long-ish cross country flight with another pilot aboard to watch for traffic (and hey, I know a pilot with some free time ;-), and just play with it. Use all the features you can remember and/or find, then go home and read the manual again to figure out what you haven't found yet. Write it down, then go fly again. Lather, rinse, repeat.

Have fun! (Like I need to tell you that.)