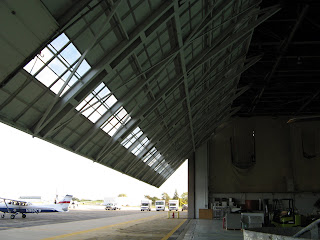 I’m trying to put things to bed at work so I can get down to Lakeland and Sun ‘N Fun. But, being that I’m going to be recording a show live on the air for the first time (at the Sun ‘N Fun Radio patio on Saturday 6:00 p.m. to 7:30 p.m. ET), I’ve also been working up a couple of things to use for that show.

I once read a piece by Robert A. Heinlein in a collection of his stuff. It was called This I Believe. I didn’t realize it at the time, but Heinlein’s essay was probably written for the five-minute CBS Radio Network program of the same name, hosted by Edward R. Murrow from 1951 to 1955. NPR revived the series a couple of years ago.

I don’t know if Heinlein’s essay ever made it on the air, but it got me thinking that I should try to write one as well. It’s not as good as Heinlein’s but it’s mine.

I’m thinking about reading it on the show at Sun ‘N Fun on Saturday, so you can think of this as a blog-only exclusive preview.

I believe in altitude, airspeed, and options. And that we don’t spend enough time thinking about options.

I believe that the Hobbs meter should run backward when the aircraft is inverted.

I believe that 100LL on your hands during preflight on a blustery January day in Michigan is the coldest substance in the universe.

I believe that pilots, musicians, actors, composers, and others like them do a special thing in an environment hostile to dreamers.

I believe in Mercury, Gemini, and Apollo and all who preceded them and all who will succeed them.

I believe in Joseph McConnell, Jr.

I believe in Fletcher Lynd Seagull.

I believe in the patient competence of nurses.

I believe that, short of a guy who has actually bent your airplane, there are vanishingly few line personnel or gas jocks who aren’t deserving of a $5 tip before you climb back into the aircraft.

I believe that all of our eggs are in one basket and that it is a species imperative that we place live, walking homo sapiens DNA on other celestial bodies as soon as practicable. I hereby volunteer for Luna, Mars, or such other destination as becomes available.

I believe in the Mercury 13.

I believe that the mainstream media is hopeless, will never understand aviation or any other science, will never really try, doesn’t care, and will continue to be our worst bugaboo in our ongoing quest for legitimacy in the eyes of the public.

I believe in anyone who has washed, marshaled, fueled, or maintained aircraft in trade for flight time.

I believe that no flight instructor should ever have to pay for lunch or beer.

I believe that anyone who has sat in an airplane all alone, firewalled the throttle, and rotated is a pilot, regardless of whether any certificate says so.

I believe in actual IMC and those who seek it as an environment in which to train.

I believe in Leinenkugel’s Oktoberfest, Bell’s Oberon, and Maker’s Mark. I have no idea why anyone would put Scotch of any kind into his mouth, but I will concede the inexplicable levelheadedness, pragmatism, and solidity of almost every person I know who likes that sort of thing.

I believe that picking a landmark on a map and then locating it out the window – in that order – is a great way to fly cross country. And that that order of operations is the worst possible way to do science.

I believe that moderates in a wrong-headed doctrine make it okay for the extremists.

I believe in whatever altitude lets you drag the gear in the top of the overcast layer.

I believe in leaving the beacon and nav lights on and looking at the airplane one last time before you get in the car to make sure that the master switch is off.

I believe that anything worth writing should go over the head of at least 50% of any general audience. Otherwise you reduce the writing to mediocrity. An audience that must be spoon fed and refuses to learn through context is not worth writing for.

I believe in telling approach that, not only do you have the Mooney in sight, but she’s gorgeous against those scattered cumulous clouds.

I believe in Tom Hanks.

I believe that you should always return the courtesy car with a full tank.

I believe that, if you can do so while having adequate reserves, you should leave room in the tanks of your airplane to buy fuel at the smallest field at which you land.

I believe that there is no volume at which one could play the music of Aaron Copland or David Kneupper that is “too loud.”

I believe in the patient and noble service of members of the armed services. I disagree from time to time with the policies of the elected officials who direct the actions of the military, but I will never look askance at the pilots, maintainers, and others who follow difficult orders under trying circumstances. I believe that it is out patriotic duty to read everything we can get our hands on, engage in public discourse, and thoroughly vet candidates for elective or appointive offices who would presume to command or direct such men and women as these. Thus – and only thus – will we preserve our civil society.

I believe in taking children to airports.

I believe that there is no other demographic like “pilot” that is more likely to identify competent, kind, and skilled people who will give you the shirt off their backs, their last quart of oil, a couch for the night, a jump start in the parking lot in the middle of the night, or directions to a good restaurant and I’m so proud to be one that I can barely stand it.

This I believe with all my heart.
Posted by Stephen Force (Steve Tupper) at 9:36 PM

Labels: This I Believe

Mr. Heinlein's This I Believe essay was broadcast on Murrow's program. You can hear it at: