Frame Grabs from the JATO Ride in the Blue Angels' C-130, Fat Albert 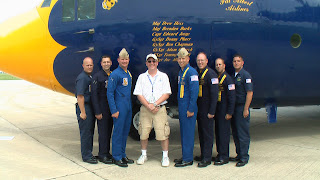 This is a regular blog post. If you’re looking for show notes or links to show audio (and there’s lots of that here!), please check the other posts.

The highlight of the day was a jet-assisted takeoff (JATO) ride on the Blue Angels’ C-130, known as Fat Albert. 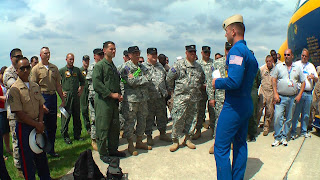 I shot video of the flight, as well as the briefing before and some of the interior of the aircraft. 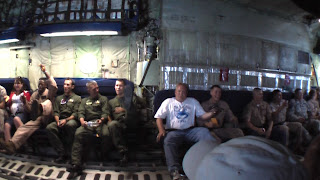 The in-flight video is a little blurry. I clamped the camera to the rail just above my seat and pointed it at the guys on the other side of the aircraft. I wish I had thought to clamp it over on the other side to get footage of myself, but I didn’t think about it until everyone was buckled in. Notwithstanding that, the folks on the other side were just fine as subjects.
The rail vibrated pretty badly throughout (and thus did the camera vibrate), so much of the video isn’t usable. But the zero-gee parts came out fine. This frame grab is from the top of the initial JATO climb, at which the pilot pushes the aircraft nose over and floats the occupants. 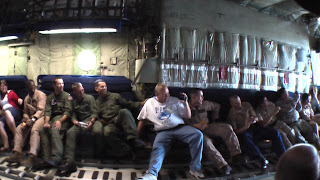 At the conclusion of the flight, they bring Fat Albert to a pretty abrupt stop and open the rear cargo door simultaneously. Everybody gets tossed forward, but not as hard as you’d expect. And, when you look out the back door, you see just how little runway they used to get her down and stopped. We’re talking a couple of thousand feet here.

The entire experience lasts only 12 minutes. It seems much longer. Among the new sensations on this flight are aerobatics with only limited outside references. There’s an approx. 18” window on the opposite side of the aircraft and you can sometimes see outside references (and sometimes not). When you can see the ground, it’s very close and it’s moving at around 350 knots.

I have audio, video, and stills that I’ll be turning into a full episode soon. Just wanted to get some of this material up so that you could see it right away.

Many thanks to the Indianapolis Air Show and to Fat Albert Airlines for this spectacular ride!