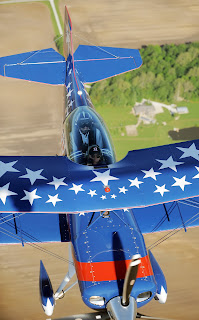 This is a regular blog post. If you’re looking for show notes or links to show audio (and there’s lots of that here!), please check the other posts.

Matt Kryger of The Indianapolis Star was kind enough to send me some pictures from yesterday’s photo flight with Billy Werth of Grayout Aerosports. I’m the guy in front operating a couple of cameras and an MP3 recorder. 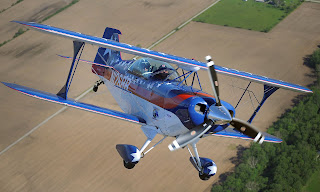 Like I said before, this was a great flight so several reasons, the most compelling of which was that this was my first time being in formation. Both the photo ship pilot and Billy did a great job of making sure that everything happened to put the Pitts in the best possible position for the shoot. That involves, among many other things, flying the right attitude, putting the sun in the right position, keeping the photo ship’s shadow off of the beauty airplane, and other considerations.

If Billy was challenged by any of that, he sure didn’t show it. A great couple of pilots on this flight and I really enjoyed getting to see it happen. 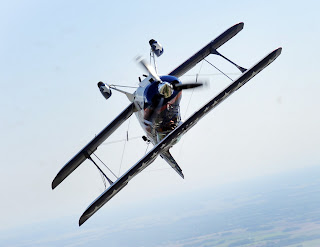 This shot graced the front page of the Star today. You can’t recognize either Billy or me in the picture, but Billy was credited in the text, so he received due notoriety for the shoot.

Stay tuned for more from the Indianapolis Air Show. And follow the show on Twitter as @IndyAirShow.

I’m here all day tomorrow covering the show before beating a hasty retreat back to Michigan to see what has piled up on my desk. It’ll be Sunday, so I’ll be in the red Airspeed shirt wandering the ramp with MP3 recorder and camera in hand and deranged fanboy look in my eye!

[Update 8 June 2009] Also, check out video from the flight at the Indy Transponder at http://indytransponder.blogspot.com/2009/06/indianapolis-air-show-coverage-6-jun-09.html
Posted by Stephen Force (Steve Tupper) at 8:40 PM