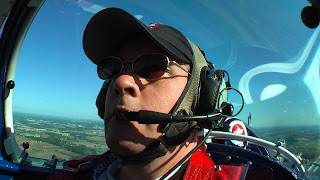 I got up on a photo mission with Billy Werth of Grayout Aerosports yesterday. I was front seat in Billy’s Pitts S-2C as The Indianapolis Star ’s Matt Kryger shot stills and video from the open door of a Charokee in the formation. 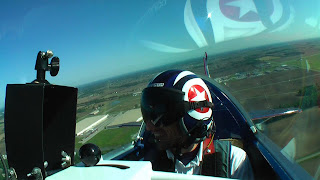 Really cool flight. It’s my first experience in a formation. We got close. I mean really close. But that’s what you can do with two really competent pilots. Billy and the photo platform pilot have clearly done this before and they know what angles and attitudes work best. We started out with some straight and level (despite the fronmt-seat placard in Billy’s aircraft that warns (“Intentional Straight and Level Flight Prohibited”) and then did a little inverted flight.

Billy warned me that the fuel filler cap sometimes leaked a little during sustained inverted flight and, true enough, I got a little 100LL on the inside of the windscreen. Good thing I’ve been doing the acro conditioning! I think that the acro around the photo ship along with a snoot of 100LL would have done the average media guy in.

And, when you’re in the beauty aircraft, your tolerance is kind of a limiting factor of the photo mission. You sure don’t want to hurl or have to end the flight because the photo team and the beauty pilot (and the public relations folks) are all counting on being able to do the entire flight and get all of the photos. I'm happy to say that I did it with no problem. 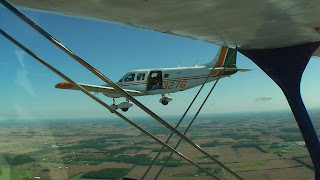 Matt Kryger, a staff photographer for the Indianapolis Star shot the photos and the video from the photo ship and I grabbed a few shots of him as well.

Great flight! Thanks to Billy Werth and everyone at Grayout Aerosports for the opportunity! Audio and video of this flight to come!
Posted by Stephen Force (Steve Tupper) at 7:07 AM