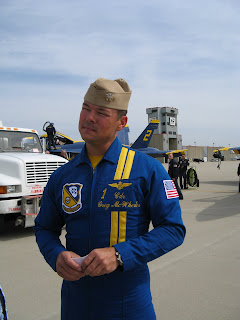 These are the show notes to an audio episode. You can listen online right here by clicking: http://media.libsyn.com/media/airspeed/AirspeedIndy20090606.mp3.

It’s early morning on Saturday, June 6, 2009 and I’m getting this episode out from Firebase Airspeed Indianapolis, namely the Holiday Inn Indianapolis East.

This is the third day in Indy. I arrived in the wee hours of Thursday morning.

The drive was long. Maybe a little longer because the transmission on my car is slipping in high gear and I watched the tach in cruise at highway speeds to make sure that the RPMs weren't climbing at a constant speed over the road.

Add to that the fact that I'd just put in 4.1 Hobbs on a four-hop training flight - Scenario 3 of the Garmin G1000 transition training - about half of which (including an ILS, an RNAV, an VOR-A, and a LOC B/C) I flew partial panel. Yeah, partial panel in a G1000-equopped aircraft is almost better than full panel in any of the round-gage Cessnas I've flown before, but everything's in a different place and it's workload-intensive, at least at the beginning. 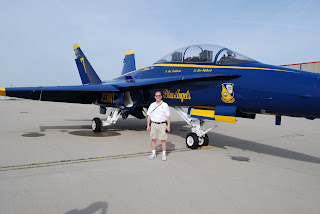 Three hours of sleep and then back at it. But that's okay. Because, a couple of hours later, I was standing on the ramp at the FedEx facility opposite the passenger terminal of the Indianapolis International Airport with Roger Bishop. If you've been listening to Airspeed for long, you know that Roger is the director of the Indianapolis Air Show, held each year at the Mt. Comfort airport about 20 minutes east of Indianapolis proper. And you might have guessed by now that we were waiting for the arrival of the US Navy Blue Angels. 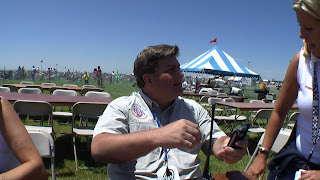 Like any airshow, this weekend is the culmination of months of work by hundreds of people. And this year was unique in recent years for the Indy show because the organizers pulled the date ahead more than two months to make it possible to host the Blue Angels.

As we waited, I gut-checked Roger.

He's unflappable, as usual. There's a lot of confidence in his manner and it's justified.

I first met Roger last year at Podapalooza at Oshkosh. Understated for a guy who heads a pretty substantial airshow. And as knowledgeable about airshow ops as anyone else I've met.

We've kept in touch over the past few months and Roger invited me to come down to the Indy Air Show. Indy is something like five hours from where I live in north of Detroit by the time you count bio breaks, so it's a non-trivial journey. But the dance card for the show is full of military, civilian, and vintage warbird participants and it seemed more than worth the drive.

Roger didn't disappoint and, in fact, surprised. Halfway through the first Red Bull of the morning, my mobile phone rang and it was Roger, offering a ride to the Indianapolis airport to meet the Blue Angels as they arrived.

This show stages the Blues remotely at Indianapolis International (KIND) and the show site is about ten miles to the east at the Mt. Comfort Airport (KMQJ). Although this means that the audience at the airshow proper doesn’t get to see the Blues step, the remote staging allows the Blues a secure place to park the aircraft and conduct operations. And it’s also kind of cool that the Blues can simply have an entire half of the airport when it comes time to launch or recover the F/A-18s. The Indy organizers have arranged for a single ATC frequency for the team between Indianapolis International and Mt Comfort, so that has to be convenient for the team.

First to arrive is Fat Albert, the Blue Angels’ Marine-operated C-130 transport. Shortly thereafter, 1 through 6 arrive at the airport, performing a carrier break over the runway and then recovering the team in short order. The ground team leaps into action and begins checking over the jets, refueling them, filling the smoke oil tanks, and otherwise checking them over after the flight in.

At the appointed moment, I walk out onto the ramp to get some pictures of the aircraft and to talk to Boss, CDR Greg McWherter. 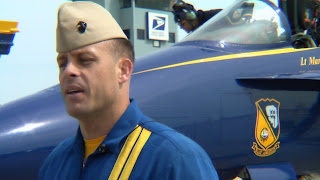 I also get a moment to chase down Maj Nathan Miller, the lead solo, who flies the No. 5 jet. Maj. Miller grew up in Lapeer, Michigan, just north of Pontiac, where I’m based. I found out last year that he and I have a tenuous connection in that Maj. Miller’s first instructor was Barry Sutton, the guy with whom I’ve been flying aerobatics for the last year or so. I pass along Barry’s best regards and the major seems to remember Barry well. Don’t we all remember our first instructors? And, every once in awhile, we get reminded of the common strings that run through aviation. 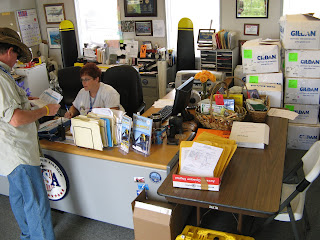 Roger gave me a ride back to pick up my car and then it was off to the show site. Mt Comfort is ideally situated for an airshow. It’s close to the major highways, but far enough off the beaten track to allow for staging of crowds and a good ingress and egress if traffic gets backed up.

The media coverage and other operations are staged at the field’s FBO, Indy Aero. The hospitality is excellent. No matter how busy it gets, people and paper seem to meet up and move where they’re supposed to be with very little friction.

Roger and I walk a short distance to the airshow office and pick up his golf cart. Then it’s on to a tour of the grounds. The show is laid out in a more or less linear way along Runway 7/35 at Mt. Comfort. The static displays are centrally located and convenient. The vendor areas are laid out along Tent Row with the usual assemblage of food and beverage and souvenirs. I get to see show center and get an idea of where I can roam on the grounds. This is a pretty good show as far as media is concerned. I can roam right up to the taxiway at show center and hang out right there next to Rob Reider’s announcer platform. Or, further down the way, get a quiet place under a big tent with the performers and line crew.

Flightline Radio is here and will be broadcasting the announcements and other content. The equipment went up yesterday and I’ll be walking the grounds with my Flightline Radio receiver Saturday and Sunday.

Roger dropped me off back at Indy Aero and I wandered the grounds for a few more hours before heading back to the hotel to do some writing and editing. I had a bit of an issue with the hotel Internet connection, which delayed the release of this episode, but, if you’re listening now, I’ve resolved those issues.

Indy has been, hands down, the best media experience at an airshow yet. Roger has personally made every effort to make sure that I and the other media will have the opportunity to get up close and personal with the performers and the aircraft and get the word out about this gem of an airshow. I’m very grateful and I’m looking forward to doing additional coverage today and tomorrow.

I should note that I got up yesterday on two media flights. The first was with Pitts S-2C driver and local Indianapolis performer Billy Werth. This was a pretty unique thing for me. Matt Kryger of the Indianapolis Star had arranged for a photo flight and was going to shoot Billy from a Cherokee with the door taken off. The front seat of Billy’s Pitts was available and Billy’s crew offered it to me. Not being stupid, I immediately accepted and got a great flight out of it. It was the first formation flight I’ve ever done and it was cool to be in the beauty airplane, maneuvering around the photo ship. Look for pictures and audio from that flight soon.

I also spent a half hour aboard the Commemorative Air Force’s “Black Sparrow” C-47. I plugged in the recorder at the crew chief’s station in the rear of the aircraft, so I have cockpit audio of the flight, although I haven’t heard it yet.

Get out to the Indy Airshow Saturday and Sunday June 6-7, 2009 at the Mt Comfort Airport just east of Indianapolis. I’ll see you there!

http://www.indyairshow.com/
Posted by Stephen Force (Steve Tupper) at 7:01 AM