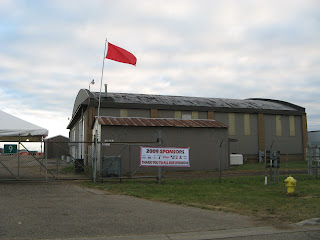 This is a regular blog post. Show notes and links to show audio appear in other posts.

Hello, Battle Creek! Rain and general malaise last night on the way here. Again! Must be a theme developing each year.

But a reasonably nice morning. No balloon launch, though. The winds are fine, but ceilings were pretty low at 6:00 when I showed up at the airport. The word had apparently already gone out to the balloonists because nobody was there around briefing time. Normally, if there’s going to be a launch, the place is full of hyper-caffeinated balloon crews with trailers.

A shame because the clouds are moving off to the west and it’s severe clear over the Panera Bread store on Capital Avenue where I’m writing this.

A little sad to realize that the Panera is on the site of the original Bill Knapp’s restaurant, now long gone. 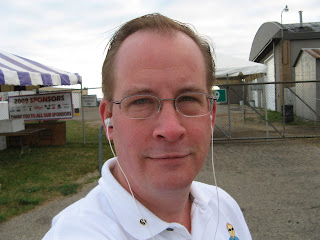 Anyway, it’s arrival day for the Battle Creek Air Show and Balloon Festival. The Thunderbirds arrive at 3:50 and they sic the media on them at 4:15. Looking forward to seeing Maj Mulhare again and meeting the new personnel.

I met Brad from WGVU, tomorrow’s media rider with the Thunderbirds. He’s 60% excited and 40% nervous. Nice guy. A non-pilot, so he has lots of questions. I resisted the urge to feed him a boatload of false information (“Dude, you can see the back of your own brain during the nine-G pull!”) and we’re going to get along fine. I’ve offered to go along and shoot stills during his suit-up, which will be fun.

I suggested that he put together his post-flight speech now and not try to think of anything original while he’s still on information overload. I did suggest something to the following effect:

“Guys, the aircraft is Code 2 at best. Eight over-G’ed the targeting pod. I tried to push, but it was too late. Anyway, who wants to get my tapes? And do you think I want to hold this helmet bag all damned day?”

But, on the theory that not everyone will get the Dos Gringos reference, I bet he’ll think of something else to say.

More as things progress. I’m also looking forward to connecting with the other performers, who are trickling in over the course of the day.

Ah, Battle Creek! How cool to be back!

The show’s PR firm is tweeting information about balloon launches and other information. Follow @bcballoon on Twitter.
Posted by Stephen Force (Steve Tupper) at 7:32 AM