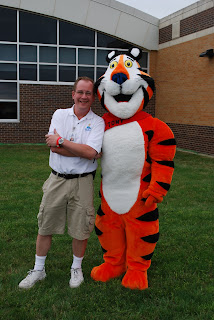 This is a regular blog post. Please check out the other posts for show notes and links to show audio.

Day one at the Battle Creek Field of Flight Airshow and Balloon Festival is complete. Rotten weather generally. High 50s to low 60s and broken to overcast at 3,000 to 5,000 most of the day. Neither balloon launch happened.

But it was still a great day at the Battle Creek show. I hooked up with the WGVU grew and some other acquaintances and worked out some details for a possible media flight or two on Friday. 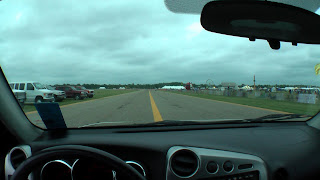 I somehow qualified for the really cool parking pass that lets you drive down the crowd line on Taxiway B. I’m sure that the average non-pilot driver doesn’t think twice about driving down a taxiway but, for me, it’s pretty weird driving a car down a strip of pavement that I usually navigate in an airplane. Most folks drive on the right side of the yellow line. Not me. I drive right on it. Trying to remember not to hit the clutch to steer left. 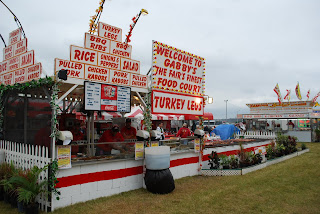 Gabby’s is here again. Oh joy of joys, Gabby’s is here again. It’s not summer without a pulled pork sandwich and huge Coke with finely-crushed ice from Gabby’s barbecue. It’s a massive cinder-block barbecue pit with pork, chicken, turkey legs, and all manner of other smoked fare. Have I had better barbecue? Of course, but not much. And when you eat a Gabby’s pulled pork sandwich with extra sauce and a side of slaw and you wash it down with a Coke so cold that it’s actually a transition-state slurry and you do all of this at the Battle Creek airshow . . . Words fail me. And words rarely fail me. 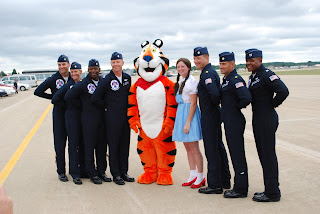 I was again on hand for the Thunderbirds’ arrival. The Wizard of Oz balloons are here this year and one of the sponsors is giving a prize for the best Dorothy costume. I was told in no uncertain terms that L. Frank Baum’s Dorothy was blond and that the brunette Judy Garland Dorothy is anathema. But the judges seem predisposed to the brunette Dorothy. Schism in the Land of Oz!

But all was harmonious when Tony the Tiger, Dorothy, and the Thunderbirds posed for this shot.

I’ve been in contact with the AeroShell team about a media ride tomorrow afternoon. The team is socked in by weather and won’t make it until tomorrow, but the weather is actually pretty clear overhead right now and it’s expected to remain so for tomorrow.

I’d love to put T-6 in my logbook in the same season during which I added T-6A, so I’m homing that either I get stick time or that my demo pilot is a CFI. Stick time seems unlikely because the AeroShell team does formation aerobatics. The media ride is a four-ship formation ride. And they’d be nuts to allow a media rider stick time in formation. But maybe they break out at some point. Regardless these are great aircraft and the pilots excellent stick and rudder guys.

Plus, I can’t let Jack Hodgson have a media ride on his kneeboard that I don’t have. Just kidding, Jack. No, not really.

Looking forward to tomorrow! Now off to Athens and Tim’s couch for some unconsciousness. Blaring Liquid Tension Experiment 2 in the car on the way there and then listening to Peter Mulvey’s Ten Thousand Mornings (an album I’m rediscovering after seeing Peter live at the Ann Arbor Folk Festival in 2004 or so, buying it on CD, and then foolishly giving the CD to the guy whose tickets I used).
Smoke on! It's airshow time in Battle Creek!
Follow balloon updates from the festival on Twitter.
Posted by Stephen Force (Steve Tupper) at 8:30 PM